Since the official takeover of Twitter by Elon Musk, the company has been in the news for multiple reasons. Musk has been taking some drastic decisions that many people around the world disagree with. However, the business mogul believes that he is doing what is best for Twitter. Elon Musk is trying to balance Twitter’s finances. He believes that the company is actually carrying much more load than it can handle. When Musk took over, Twitter had a little over 7000 staff. However, Elon Musk sacked no less than 3500 employees while many others voluntarily resigned from the company. Today, Elon Musk in a Twitter post revealed that the company has about 2,300 active employees.

CNBC reported on Friday that Twitter’s full-time workforce has been reduced to about 1,300 active employees. The report claims that the number includes fewer than 550 full-time engineers. Elon Musk’s tweet is to debunk this false report. CNBC also claims that about 75 of the company’s 1,300 employees are on furlough. This includes about 40 engineers, CNBC said, citing internal records.

“That claim is incorrect,” Musk tweeted in response to a tweet citing CNBC. “Twitter has approximately 2,300 active employees.”

Musk adds: “There are still hundreds of employees working on trust and safety, and several thousand contractors. My other companies have less than 10 people working on Twitter.”

In addition, Musk also said that Twitter can be updated normally in the Apple App Store. Musk took over Twitter last October — for $44 billion — and quickly made a series of product and organizational changes. The company rolled out a modified Twitter-verified Blue badge as a paid service and also laid off about 50% of its staff.

After blocking the third-party Twitter client, Musk tweeted today that a “new” feature will be introduced. In fact, these “new” functions are not new. They have been online for a while before, But they were withdrawn because the effect was not very good. Elon Musk previewed the fixed list feature in his tweets and introduced the 3 steps required to enable the feature. In fact, this feature has been launched as early as 2019, but the user frequency is not high, and finally, Twitter returned to the normal timeline. 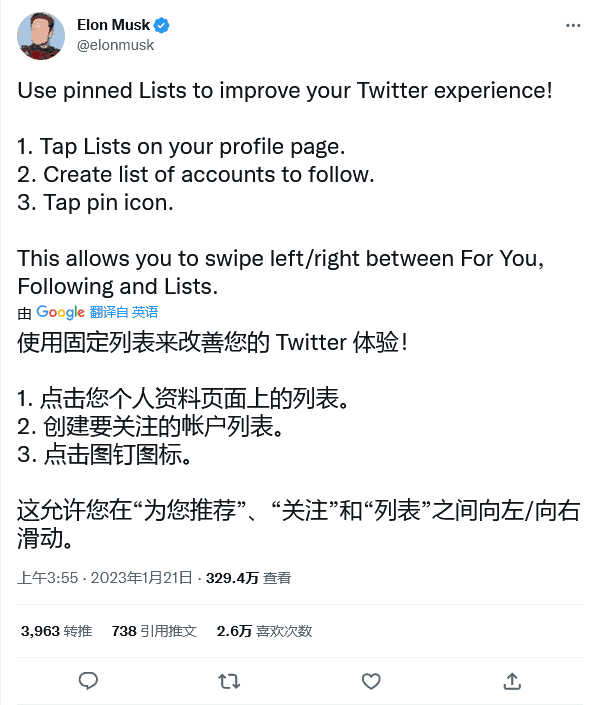 This feature is the ability to create timeline content based on specific topics. Creating different timeline content based on specific topics sounds great, but Twitter’s previous attempts have not been successful. Before being acquired by Musk, Twitter still used algorithm-based recommendations as the default timeline, rather than chronologically.

Read Also:  No More Third-party Client Apps for Twitter, they are all Banned

Twitter engineering manager, Siddharth Rao oversees the engineers working on Twitter’s ad business. During a staff meeting on Tuesday, he told staff in a speech that more than 500 of Twitter’s top advertisers have stopped ads on Twitter since Musk took over.

He also reveals that the company’s daily revenue on Tuesday, January 17 was down 40% from a year earlier. The main reason for this crisis is the issues with its core ad business. Since becoming Twitter’s new boss, Musk has fired thousands of staff and rushed to roll out paid authentication features. This will allow many scammers to create fake accounts on Twitter. The chaos has prompted corporate advertisers to flee Twitter.

Separately, Twitter also reversed a ban on political ads after it and other social media companies such as Facebook were widely criticized for allowing election misinformation to spread on the platform.

Twitter does not allow the development of third-party clients

A few days ago, Twitter released the “Developer Agreement” updated terms. The new update clearly states that developers can no longer develop third-party Twitter apps. It is explicitly mentioned in the terms that developers are not allowed to “create alternative or similar services/products to the Twitter application”. 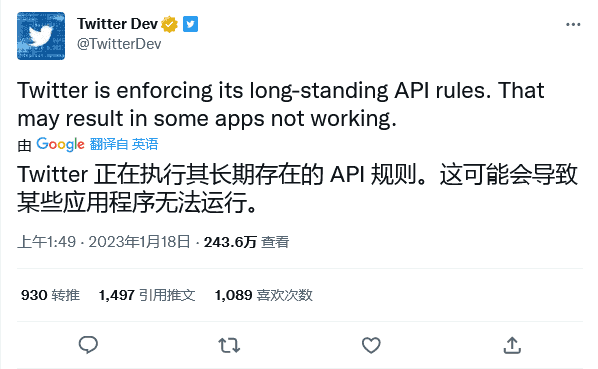 This means that third-party Twitter apps such as Tweetbot, Twitterrific, Aviary, Echofon, Birdie, etc. will no longer function properly. At the moment, it is unclear whether these third-party clients will restore access in the future. Twitter officials quietly adjusted the API last Thursday. The result of this is a large number of third-party clients not working properly. The official tweeted on January 18, saying: “Twitter is enforcing its long-standing API rules. This may cause some apps to not work.”

During the whole process, the developers of the third-party client never received any notification from Twitter. They also did not receive an official letter requesting closure. Twitter and even officials have never made it clear which APIs are violated.

The company has been trying hard to cut costs since Elon Musk took over. For Mr Musk, the basic way of cutting costs is to fire employees. However, this is not the only way. According to reports, Twitter has auctioned off some office supplies at its San Francisco HQ. The company sold off a wine cooler, pizza oven and other supplies. This appears to be the latest move by the company to cut costs.

An auction page of the auction company, Heritage Global Partners shows that more than 600 items were sold online. On the page, the items are described as “surplus office assets”. It is worthy of note that the auction items include a 10-foot-tall Twitter bird logo neon sign. The final auction price of this asset is $40,000. However, Nick Dove, president of Heritage Global Partners, said in an interview that the auction has nothing to do with Twitter’s crisis.

Previous Oops! The Samsung Galaxy S23 Ultra is up for sale in this store