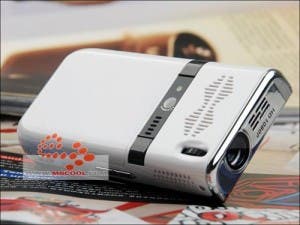 Samsung was first to launch it’s Beam pico projector phone last month, and LG are sure to follow, but the Shanzhai crowd have beat them to it.
The aptly named Cool GTW18 (the cool is fine, but GTW18 sounds like an all purpose oil) was launched just after Samsung’s Beam, and had the Chinese phone sites up in quite a bit of a frenzy! Not only is it in direct competition with the Beam, but it also acts as a smart phone and only cost 800 RMB! ($117).
Chinese review site M8Cool tested the Cool GTW18 and put it’s claimed HD 1080P output to the test, obviously at this kind of price it was unable to live up to expectations and even performed poorly at a resolution of 720 x 480.

However, along with the low price there are a few functions which might make this worth buying. There’s a 3.2 inch touch screen, Wifi connection, a 1500 MAH battery, which should see around 40 minutes of projectile slide show run time and a mini SD card expansion slot.

We’ve personally never felt the need or want for a projector phone, but if you’ve ever wanted to bore strangers on the subway with your holiday snaps the 800RMB Cool GTW18 is certainly the tool for the job!