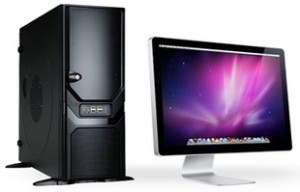 If you we’re a Mac user in China 5 years ago you had an uphill struggle on your hands. Most Chinese sites were optimised for Internet Explorer, Apple stores were few and far between, software was extremely difficult to locate and local Chinese I.T ‘experts’ were unfamiliar with the OSX operating system and deemed most things incompatible, such as a  dial up connection, when in actual fact it was their knowledge that was incompatible and out of date rather than the hardware in use.
All this changed with the introduction of the Intel Mac and the iPhone. The iPhone spread the word of Mac, and the Intel processors allowed Chinese consumers to run their favourite O.S (Windows XP) on a Mac with no performance loss.
This new found love for all things Apple has spurred on an increase in clones ranging form iPod and iPad copies to the popular Macbook Air knockoffs found around Shenzhen.
Copies and clones are old news and have been on offer in many forms for a good few years, but recently a new Mac knock off has gained popularity! The Hackintosh.
Again, Hackintosh computers are nothing new, but the emergence of online retailers offering laptops and desktops with the latest Mac O.S, in China, is!
This computer is a Shanghai retailers version of the Mac Pro. Costing from 2500RMB with dual core Intel processors to 8500RMB with i7 processors! This ‘Hack Pro’ costs significantly less than a similarly spec’d genuine Mac, and comes with a whole host of professional software, such as Final Cut, pre installed too!
Obviously you don’t get the same shiny Apple exteror, but once the ugly black tower is plugged in to your flat screen monitor and safetly hidden away under the desk by your feet, you soon forgive and forget.
Snow Leopard 10.6.3 is installed and update ready, with most common applications working out of the box with the exception of Bootcamp which won’t run natively on certain processors (Virtualbox works though).
The same retailler has a rather interesting Mac Mini and Macbook Air Hackintosh available, which we will be reporting on later.