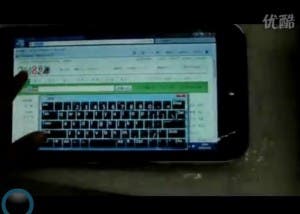 We reported last month that Shenzhen based TESO had an iPad clone up their sleeve and here it is! The specs are the same as we reported before: Atom 1.66 Mhz processor, 3G, Windows 7……. All your standard netbook/cheap tablet specs.

The video below shows the TESO in action and we have to say that we’re a little underwhelmed! The touch screen seems to be a little touchy (no pun intended!) wanting to work sometimes, being unresponsive and then becoming far too sensitive. Obviously the TESO is aiming at the iPad market and has some extras that the iPad hasn’t such as multitasking, Flash support and USB slots, but looking at the video the iPad is going to give a better user experience.

Anyway we’ll let you check out the video for yourselves and let you be the judges, and don’t forget to see our previous post on the TESO iPad clone for more details and pictures.