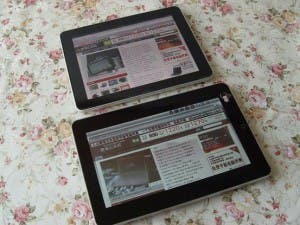 Chinese website Shanzhaiben took a few minutes to compare the Android aPad to the Apple iPad. Here’s what they noted after a quick once over.
The first picture shows both the iPad and the imitation aPad side by side, but which is which?
Knowing that the iPad has a 4:3 ratio screen and the aPad is 16:9 it’s easy to figure out the imitation is located below the real iPad, without that knowledge though it really would be difficult to distinguish the two.
Taking a closer look at the screens we can see one of the devices is much brighter and clearer than the other, again due to our knowledge of both devices (and the fact the carrier says ‘iPad’) it’s easy to see that the device closest to us is the iPad. The reason for the much clearer text and brighter colours is the screen resolution. 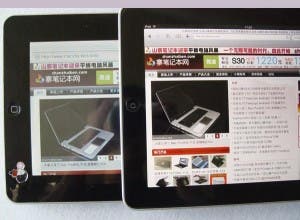 Another big difference between the two is the material used for the chassis.

The iPad uses alloy where as the aPad is plastic, meaning the iPad is going to be much stiffer and more durable. We would also expect the iPad to weigh more due to the alloy, but they both weigh in at 680 grams! The iPad is also thinner at 13.4mm, the aPad is 15mm.
We hope to get our hands on an aPad within the next few months for a full in depth review.

Next There’s An App For That: Driving in China