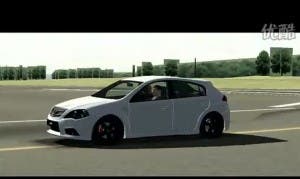 Although not officially aired in China, the BBC’s TopGear car show has a huge following in China. Chinese fans are able to keep up with Clarkson and co. through the Chinese version of The TopGear magazine, while more tech savvy fans are able to watch the latest episodes of the hugely popular show on-line.
Chinese netizens and fans of TopGear have found a bit of a problem with the British show. The problem being the complete lack of Chinese made cars driven, reviewed and thrashed on the show and it’s infamous test track.
Thankfully though one creative computer programmer from China known as ‘rFactor’ has decided to code the entire TopGear test track into his/her computer complete with computer models of Chinese made cars and set a simulation up and running to see how China’s finest would cope with being thrashed around by the Stig.
The first Chinese car to be simulated around the TopGear track is the Brilliance (中华) FRV GT, a 1.8 liter turbo charged hatchback with rather handsome styling (the GT is still a concept, but 1.3 – 1.6 liter version have been on sale since 2008).
Check out the video after the jump to see how well China’s hot hatch would do if it were set upon by the TopGear crew.

Previous China Looks For Aliens From The South Pole