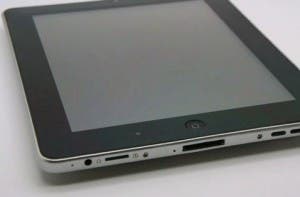 So what makes this Cool Technology Froyo running tablet so cool? Well, the 800Mhz CPU is made by the same company who once made chips for Motorola, which is pretty cool. It comes installed with Android 2.2 Froyo, which makes me think of Frodo from ‘Lord of the Rings’ and then of giant fighting trees, also cool! And (if your not a bitter iOS user, which I’m not) this little tablet can run Flash 10 out of the box! COOL!

It also gets 512Mb of RAM, 4 Gb of internal storage, a micro SD card reader, an 8 inch touch screen and it only weighs 480g.
As it’s currently only available OEM there isn’t any branding on the shell or the packaging, plus there is no news on retail price. However, I’m feeling a little saucy and am hazarding that once on shelves the ‘FroyoPad’ will set us back around 999 Yuan ($150).