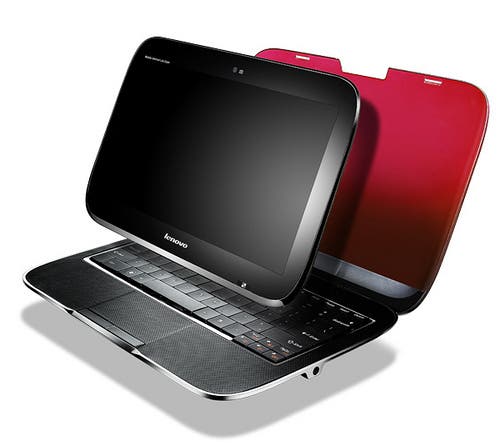 At CES this year the much awaited Lenovo IdeaPad hybrid netbook tablet was shown off once again to the eager crowds.
The little netbook acts as a Windows 7 netbook when combined with the screen, but when separated the screen acts a stand alone Android tablet.
The concept is awesome, but the estimated price is pretty extortionate at $1000!
But if you’re looking to pick yourself up one of these hybrid style devices you might want to wait to see what the local Chinese factories come up with.

Prices for locally made Chinese netbooks based on Atom processors are currently pretty low, and you could easily pick one up with a 160Gb hard drive and 2Gb RAM for as little as 1500 Yuan.
Then a 10” tablet running Android 2.2 with capacitive screen, 1Ghz CPU and 512mb RAM can be found for around 2000 Yuan.

So, its realistic to expect one of the more enterprising and ingenuous Shenzhen factories could take take two and produce inexpensive Windows 7/Android 2.2 hybrid netbook/tablet computers for as little as 3500 Yuan

Obviously our guestimations aren’t very accurate and there will be some cost for research and development, but it’s not unreasonable to expect to see hybrids readily available within a few months!

Only time will tell if our predictions are accurate, in the mean-time why not follow us on Twitter to get the latest Chinese tech news.

Next Why Won’t My Tablet Remember The Time?