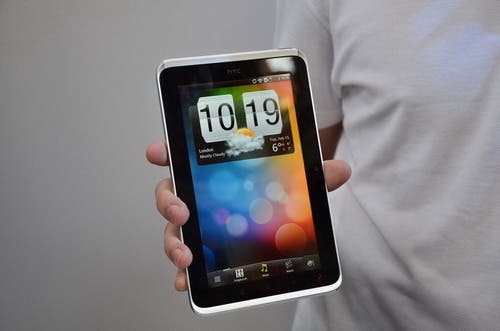 HTC have finally jumped on to the Android tablet bandwagon with their new Android 2.4 running Flyer Tablet. The Flyer will feature a 7 inch capacative high resolution screen (1024 x 600), 1.5Ghz Dual-core Qualcomm CPU, 1Gb RAM and 32Gb of NAND Flash built in storage space. All of this lovely hardware will come wrapped in a nice shiny alloy body.

Unlike other manufactures HTC have decided to first launch the Flyer with Android 2.4 and later offer a Honeycomb update. Another interesting point is that the Flyer will also come with a capacitve stylus which will allow you to jot down notes while reading e-books, this feature alone could make the Flyer a must have for university students!

Pricing has been set at $669 (5980 Yuan) which is more than we hoped but it does come with built in GPS, a large 4000mAh battery, electronic compass and accelerometers.

A video of the HTC Flyer tablet has been posted on YouTube and can be seen here at AndroidOStablets.com.