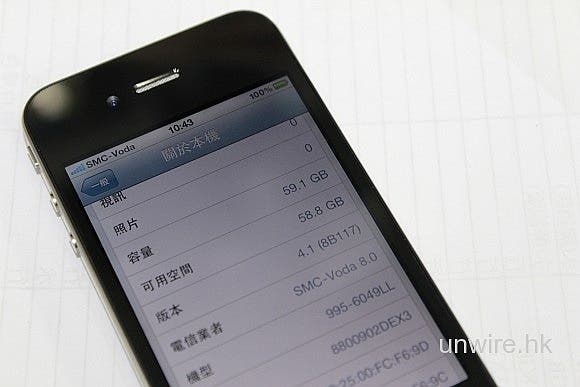 We are still determining if these images are indeed real, but if they are it means a 64Gb iPhone 4 was at least planned at one stag, but more interestingly a small quantity of ‘engineering proto-types’ have made their way on to the grey market in HongKong.

The body of the 64Gb iPhone 4 is the same as current official versions as you would expect, that is until you turn it around and see the two large ‘X’s’ in the space the amount of memory is nomally printed. The model number is also replaced with a bunch of ‘xxxxx’ which reminds us of the iPhone 4 leaked to Gizmodo last year.

When turning the 64Gb iPhone 4 on and going in to the settings we can see that this iPhone 4 is running the older 4.1 iOS and that it is unlocked!

We have no details on pricing, but it will be interesting to see if this was just a planned phone now dropped from production or if this will be a stop gap iPhone 4 released later this year, which would mean we would have to wait until next year for iPhone 5!