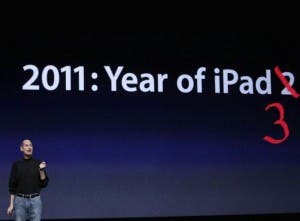 Taiwanese news reports are claiming that manufacturers in Taiwan have already started to produce the parts needed to produce the next generation iPad, the iPad 3, and that we are likely to set eye’s on the third generation Apple tablet at this June’s Worldwide Developers Conference (WWDC).
The suppliers claim that casing parts for a completely re-designed body are currently being made along with new screen and camera components.

Other details claim that the iPad 3 be compatible with high speed 4G data networks and will feature better front and rear cameras, the front getting an upgrade to a 3 mega-pixel unit, while the rear will jump to 7 mega-pixels!

The idea of an iPad 3 launching so soon after the iPad 2 seems a bit far fetched, but if Apple are taking the continuing onslaught of Android tablets currently flooding the markets as a serious threat to their tablet market dominance it is possible, albeit unlikely, we could see an iPad 3 this June!