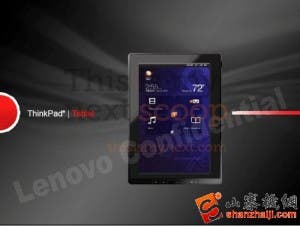 It looks as though Lenovo are preparing another Android based tablet, but unlike the current Lepad brand the new tablet will shelter under the ThinkPad brand.

Nothing is confirmed as of yet, but the details which we have uncovered say the sleek black ThinkPad Android Tablet will run Android 3.0 on a Tegra 2 dual-core CPU with a 10 inch IPS capacitive screen with a resolution of 1280 x 800.

The ThinkPad tablet will get a claimed 8 hours battery life and will be available from July at $499.

The ThinkPad tablet here should not be confused with the Shanzhai ThinkBook tablet we featured a week ago.

Previous iPhone 5 To Get ‘Scent Technology’ and ‘Solar Charger’ Video