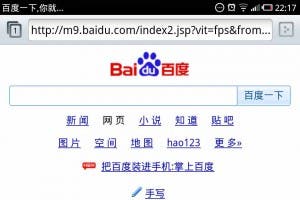 Baidu already have more than 75% of the Chinese search engine market all to themselves and are beginning to eat away at Google rather slim share, but that isn’t enough for General Manager of Baidu, Yueguo Feng as he has plans to whip Google’s Android OS  from the American web giant.

Baidu today claimed that they are in talks with a number of Android smartphones makers in China and who sell phones to the worlds fastest growing cell phone market, to have the default Google search replaced on handsets with Baidu’s own. The talks seem to be going well for Baidu too as they claim 80% of all Android phones that will be sold in China will be getting Baidu search as default rather than Google’s.

The news is obviously going to leave a soar taste in the mouths of those at Google, but what can they do to retaliate short of withdrawing Android from open source? Surely they wouldn’t do that would they?

Previous iPad 2 Coming To China May 6