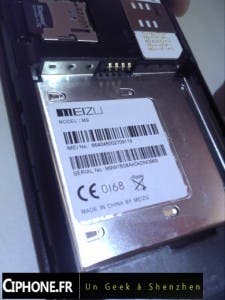 Meizu keep shocking the world with their smart phones, and the latest news of them receiving official CE approval could have huge implications for the tiny Chinese electronics group.

The first shocker a few years ago was when Meizu released their Windows CE based M8 smart phone. It drew a lot of positive and negative attention, and even prompted Apple to take legal action against the young company due to the M8’s similar design to the then current iPhone (the original 2G iPhone).

Fast forward to the start of this year and Meizu shocked again, with the M9. A 1Ghz Android 2.2 smart phone with an absolutely beautiful screen from Japanese company Sharp. But the surprises weren’t over!

Jack Wong, then released details of his companies plans to set up shop in California, and later leaked images of the M9’s successor the MX!

Now, the latest news reported on French gadget blog, CiPhone.fr, is that the Meizu M9 has just received official CE approval! What this now means is that the M9 can be officially exported to European markets and legally sold there.

Whether the latest news has anything to do with a Meizu launch in the EU is anyone’s guess, but we’ll keep a close eye on how things pan out.

Thanks to reader Greg for the tip!

Previous This Chinese Crane is Capable of Lifting 98 Statue of Libertys!!