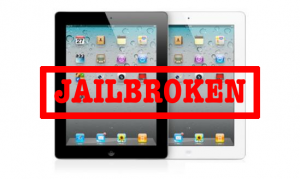 My wife might be pretty unhappy when I get home! The only thing stopping me from buying a shiny new iPad 2 was the lack of Jailbreak, but thanks to Commex (and an unverified leak) it’s here!
As we reported a few day’s ago Commex has been hard at work on JailbreakMe 3.0, and for a few short hours it was made available here:

Unfortunately, the version of JailbreakMe 3.0 released at the above site seems to have been either a mistake or leak, as the Jailbreak is no longer there! 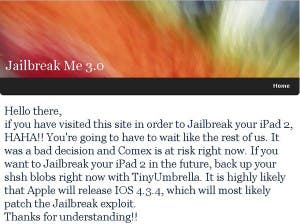 However, for all of you who still want to Jailbreak there iPad 2 and don’t want to wait for the official version of Jailbreak Me 3.0 to be released don’t worry as some kind sole has sent us a link!

How to jailbreak iPad 2 with Jaillbreakme 3.0 instructions and video!

Jailbreak Me 3.0 is much like the original Jailbreak Me, as it makes use of a security flaw in iOS 4.3 on the iPad 2 to allow a PDF to be downloaded to your iPad, which then jailbreaks and install Cydia.

The steps are super easy, and it’s a much handier way to Jailbreak your iPad to than say Limera1n or Redsnow which requires more technical knowledge.

The current leaked Jailbreak Me 3.0 is supposed to work on iPad 2’s running iOS 4.3 and iOS 4.3.3, only the Wi-Fi model is supported as of the time of release (leak).

For instructions on how to Jailbreak your iPad 2 with JailbreakMe 3.0 head to our how to page!

How to jailbreak iPad 2 with Jaillbreakme 3.0 instructions and video!

Previous Gooapple 3G Ultimate iPhone 4 Clone: 4 Pages of Everything you Need To Know!

Next How to Jaillbreak iPad 2 With Jailbreak Me 3.0