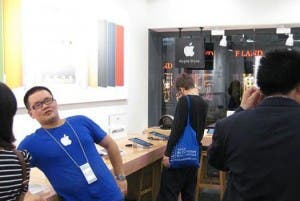 Looking at these pictures of this Apple store in China, you would be hard pushed to tell it was fake! Not the products being sold mind you just the store!

Over the past few years ‘official’ Apple stores have been popping up all over China. Some, like Coodoo, seem legit enough, and have stores inside major department stores, offer loyalty points, and frown at you when you ask to have your iPhone or iPad Jailbroken (although they did ask me if I wanted Microsoft office for free when I bought my Macbook Pro earlier this year).

Then of course there are the small stores inside of huge ‘computer cities’ throughout China, who have obviously managed to get their iPad 2‘s ‘off the back of a lorry’.

But this store shown in the pictures looks just like the real thing! Even the bloke casually leaning on the table with his blue Apple t-shirt seems to ooze ‘Apple Employee Smugness’.

Only the more eagle eyed shopper would have noticed the unofficial Apple accessories on the wall which gives this fake Apple store away, that and the fact they will Jalibreak your iPhone for 200 Yuan ($31).

Apparently these unofficial Apple stores are allowed to stay open despite not being official, while that really makes no difference to us (unless there’s a warranty issue) I’m sure it’s really eating at Apple!

Next HTC Facebook Phone is a Weike Weibo Phone in China: Video