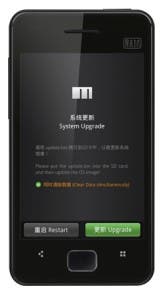 The ROM was actually launched as a BETA last week but as no bugs were found (really Meizu?) it has been officially released for everyone to enjoy.

Download links for both the Firmware and Baseband can be found at the end of the post.

Once downloaded follow these instructions we posted on ‘How to update your Meizu M9“.

Previous What Happens If you take a Fake Mac to the Apple Geniuses?