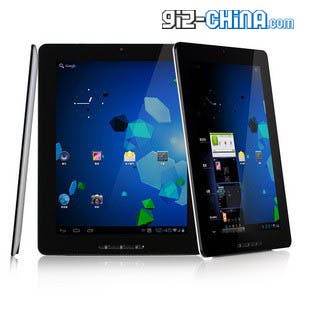 Onda are another one of the many Chinese tablet makers across the country you have probably never heard of, but if their Onda Vi40 tablet is anything to go by they are soon to put that right!

There have been plenty of great Android tablets out of China these past few months, and with the Google’s release of Android 4.0, we’re set to see a shower of excellent tablets with great hardware on shelves soon!

Like many tablet from China the Onda isn’t going to win any prizes for its name, however it’s specification looks to be pure gold!

It’s easy for us to make comparisons between the Onda Vi40 and the iPad 2. they both have a similar looking designs and both use a 9.7-inch screen with IPS technology. IPS screens are known for producing much better viewing angles, and seeing one on a Chinese tablet is a pleasant surprise. 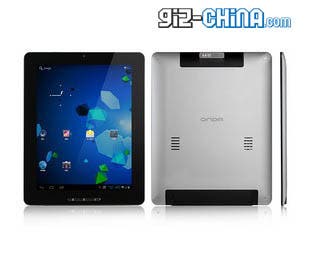 There are some big differences between Onda’s tablet and the iPad 2 though, and unfortunately for Apple the Onda looks like a much better tablet (on paper at least).

Of course that’s not all the Vi40 has to offer, there is also an Android Ice-cream Sandwich operating system lurking inside with offers all the latest benefits and updates ICS tablet from Samsung and Motorola will offer.

One of the biggest selling point (bragging points) of the Onda ICS tablet is the 6500 mAh battery. While there are tablets with larger (the new iPad is rumored to have a 14,000 mAh battery) few offer the 25 day standby time the Onda claims to have. 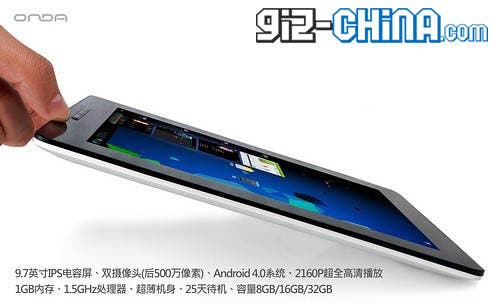 Obviously 25 days stand by doesn’t translate to 25 days gaming of video playback, even so the Vi40 manages to claim an impressive 8 hours of continuous use.

I’m still not sold on the whole idea of using your tablet as a camera. There are those who will disagree and will now find it perfectly normal to view the world through a large 9.7 inch screen while snapping photos, but it’s just not for me.

However, if you do find you are snapping pictures with your tablet, you will be happy to know that the Onda Vi40 has a 5 mega-pixel rear camera, which is capable of filming 720P HD video.

Plus there’s also a 1.3 mega-pixel front camera which will act perfectly as either a replacement mirror or web camera.

Onda Vi40 Elite Price and where to buy

Price of the Onda Vi40 Elite tablet running Android ICS is expected to be $199, and you will be able to grab one over at Android-sale.com as soon as they have stock.