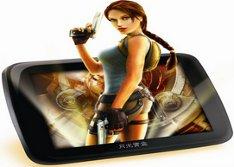 Aigo are one of the larger Chinese technology companies (they even sponsored the Ferrari F1 team at one point) and at this year’s CES they are hoping to draw a crowd with their new 3D video camera and portable media player.The new Aigo 3D video camera, named the Aigo AHD-X30, is the latest in the wave of low cost 3D video cameras which are likely to prove popular this year, and is actually Aigo’s first ever 3D video camera to date.

What’s is nice about this piece of stereoscopic capturing 3D camera is that Aigo have also relasead a 3D media player, Aigo’s PM5950, which will happily play what you have captured and play it back via it’s glasses-free screen.

Both the 3D enabled gadgets are likely to be at the lower end of the price spectrum, so we can all now afford to make our own versions of Avatar in the back garden.

Aigo’s 3D video camera, the AHD-X30, is the first and only video camera of its kind to be developed by a Chinese company. When working in conjunction with Aigo’s PM5950 glasses-free 3D portable media player, users will enter a three-dimensional world, offering them a sense of freedom that traditional cameras simply cannot offer.

Aigo is also highlighting its aigoCloud technology at this year’s CES which is capable of supporting not only standard functions such as copying and syncing, but also some special features such as sharing and filtering. This cloud technology has been applied to many of Aigo’s products such as its aigoPad M801 and digital photo frames. The technology can also support coping and syncing of files in any format and size, such as music, pictures, videos, documents, and other data.

Aigo is also presenting two of its aigoPad models, the M803 and M718HD, at the show. The M803 aigoPad is equipped with the ARM Cortex A9 and Android v4.0, providing a whole new experience to customers with its unique, dropdown menu, photo editing, and other functions. Multi-touch will allow users to have even more access to what they want at the touch of their fingertips. The M718HD will draw users in with the visual experience it offers, capable of supporting 1080p of HD video content and a HD webcam installed in the back.

“At Aigo, our goal is to give people more freedom in their lives,” said Mr. Feng Jun, Chairman and President of Aigo Digital Technology Co, Ltd. “CES serves as a great platform for more people to experience the freedom Aigo’s products can offer them. Nothing surprise you more,” said Feng.

Aigo has developed into an IT enterprise dedicated to R&D and brand promotion. Its products include mobile storage devices, multi-media players, computer peripherals, data security, etc.