If you are a Mac user in China and you are using OSX (many don’t) you may well be a little frustrated with the lack of support for local Chinese web services, but Apple’s OSX 10.8 Mountain Lion update is going to put all of that right!

Currently in OSX 10.7 and earlier versions of the Apple OS, Apple have only included support for international services.

Opening the Mail application for example offers Gmail, Hotmail and whole host of other Western email services. The same goes for video when sharing from iMovie. Facebook, Youtube, Vimeo and others are supported natively, but to a Chinese Mac user these options are next to useless. 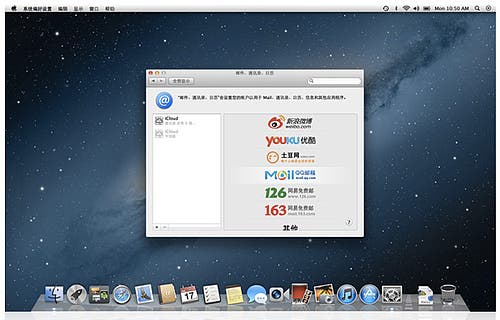 For Mac OSX 10.8 however Apple are addressing these issues by adding native support for Chinese webservices such as:

Youku and Tudou will act as Youtube replacements for Chinese users, as Youtube is blocked in China. Weibo is Sina’s version of Twitter, but also packs many features Facebook users are use to seeing.

QQ, 126 and 163mail will act as alternative email clients and will also allow syncing of contacts and calenders, just as Gmail works now.

Other improvements for the Chinese version of OSX Mountain Lion will be improved Pinyin input, which will feature better auto correction, and will work alongside the English keyboard so users don’t have to switch between input methods as often.

Apple are expected to launch the new updated version of OSX 10.8 Mountain Lion this Summer!

Next New Nightly Builds of CyanogenMod 9 For HP Touchpad Available