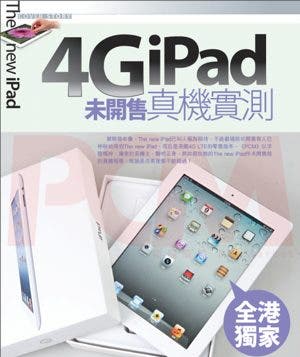 We have no idea what has happened to Apple and it’s secretive grasp of it’s new products but first we had this unboxing and brief hands on video with the new 4G iPad, and now we have 2 more new iPad videos with comparisons thanks to Hong Kong based tech magazine PCM!

The Hong Kong based technology media outlet reported that they managed to secure a retail version of the latest 4G LTE iPad from someone who managed to get one straight after the iPad launch event on 8th March.

The magazine haven’t wasted anytime with their new white iPad and have quickly reviewed the new Apple tablet and have posted 2 videos on YouTube, which compare the iPad 2 to the new iPad and show off the new iPad’s camera.

PCM report that the extra 50g heft then new iPad has over the iPad 2 is actually quite noticeable when used for prolonged periods of time, and that the new camera doesn’t take photos in as wider field as the iPad 2’s rear camera. 4G couldn’t be tested as Hong Kong, like the mainland of China doesn’t yet have a 4G network.

In other news we hear that Facetime on the new iPad will only work over Wi-Fi and not over 4G LTE connection, just as it is currently limited to Wifi on the iPad 2 and iPhone 4/4S.

As you can expect Apple are suitably pissed at the current crop of early iPad leaks, but we also imagine the secretly love all the attention they are getting!

Previous Knock off Macbook Air Gets a 14inch Update!

Next New iPads Fetch $1600 on the Chinese Grey Market