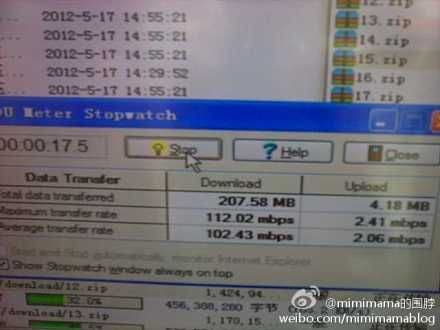 China mobile are currently testing their new 4G LTE service out in the South of China which is pretty exciting news for all of us who are fed up with slow connection speeds here in China, but just how fast is China Mobile’s 4G network? Try blazing fast!China Mobile are rolling out their 4G LTE testing quite literally in the South of China, by equipping buses with on board WiFi which then connects the the companies 4G network.

A Sina tech journalist managed to hop on one of these buses while empty to test out just how fast China’s first 4G LTE network actually is and was shocked by what he discovered!

While in transit the 4G enabled bus managed to peak at a download speed of 60 Mbps with the average staying around 40 Mbps, however while parked up those figures nearly doubled with download speeds reaching a super fast 112 Mbps with an average rounding off to roughly 102 Mbps!

Those speeds are pretty impressive, however this test was conducted on an empty bus on a very early version of the China Mobile 4G infrastructure. It will be interesting to see just how fast China’s 4G LTE is when it is finally released for all of us to use!