The iPhone 5 is here! It’s lighter, thinner and more powerful, but it isn’t all that spectacular or magical unless of course you consider the price tag of the base model! The new iPhone 5 will sell for a cool $720 in Hong Kong which happens to be significantly more than the amount of money Foxconn invests in taking care of its staff for a year!

While Apple announced all the ‘great’ new features of the lighter, thiner iPhone 5, Chinese workers at Foxconn factories in Shenzhen South China were/are toiling away in poor conditions to get the latest Apple phones in the the pocket of fans across the world!

Foxconn worker wages and living conditions have hit the headlines all to often over the past year. Thankfully the Chinese government have taken an interest and are rolling out a pay increase for all Shenzhen electronics workers, great news! But what is being done about the working and living conditions for staff at iPhone 5 factories?

This past week an undercover reporter for a Chinese newspaper gained access to the high security, highly secretive Foxconn factory where the iPhone 5 is being produced. While there the report witnessed first hand the poor living conditions and managed to take a few photos. 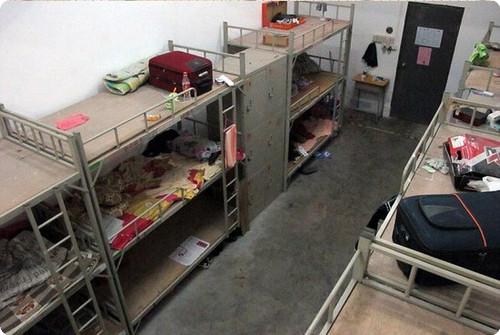 Dormitory rooms at Foxconn’s iPhone 5 factory sleep as many as 12 people on cold steel beds in what can only be described as large prison cells with concrete floors! 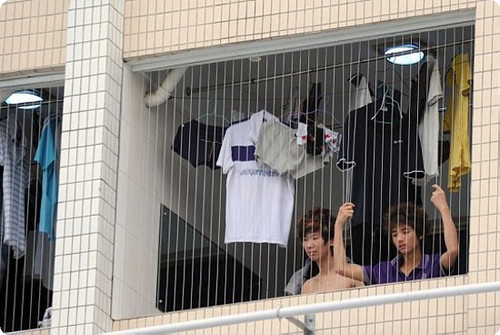 They have even placed bars on the windows to complete the ‘prison cell’ theme going!

It is estimated that the cost of housing 12 Foxconn staff who manufacture the iPhone 5 could be as little as $1000 per year, which is roughly the same price as a 32GB iPhone 5 once it launches in Hong Kong and mainland China!

So before heading out to the Apple store on the iPhone 5 launch day, 21st September, to pick up your new Apple iPhone 5, spare a thought for the hundreds of Chinese workers huddled together on their steel beds and working for peanuts who made it all happen!