If you are living in the U.S and you have an Android tablet the chances are that it’s from Zenithink, as believe it or not this Chinese tablet maker has been making U.S tablet users happy for the past few years with its low cost offerings. Now Zenithink are entering the 6 inch phablet market with the Zenithink N6!

Details are bit think on the ground as to just what the 6 inch Zenithink phablet will be packing  once it is launched but this low-cost, and likely great performing, Chinese phablet is expected to boast with the current dual-core MTK MT6577 CPU or even the next generation quad-core MT6588!

Other than that and this 6 inch phablet will sport built in 3G and Wi-fi, and likely GPS, all we know of Zenthink’s plans are the designs for the N6. 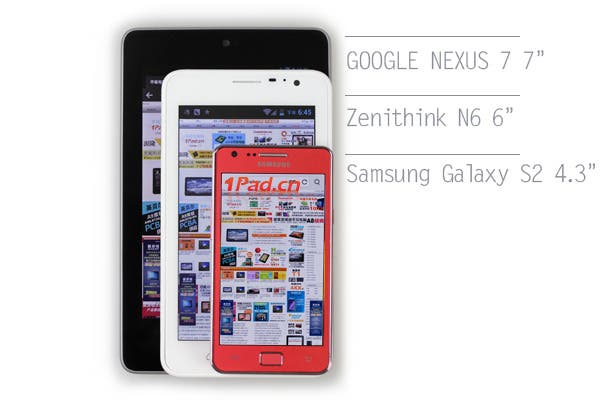 As you can see from the size comparison here the Zenithink N6 phablet will sit between the Nexus 7 tablet and Samsung’s Galaxy S2 for size which makes the Chinese phablet considerably larger than the iPhone 5.

What is most intriguingly though is the profile of the Zenithink N6 phablet which from these leaked images seems to have an extreme taper to the center of the device along its rear, which should improve the feel of teh 6 inch phablet in smaller hands.

We’re still waiting on price and most importantly the screen resolution but fingers crossed this could be one of the first high-resolution 6 inch phablets from China this year!

Next Leaked: New Oppo T29 dual-core phone with 3000mAh battery! could be a JiaYu G3 alternative!