Chinese tablet brand Ainol have long been one of the better brands with its great range of 7 inch Android tablet which boast both high-end hardware and the latest Android OS. Ainol have now announced their first 10.1 inch tablet! Full details of the Ainol Novo 10 Hero Jelly Bean tablet after the jump!

The new Novo 10 series of tablet will debut later this month with the first device becoming available being the Ainol Novo 10 Hero a 10.1 inch tablet with Android Jelly Bean priced at 999 Yuan ($160).

Coming equipped with a 10. 1 inch 1280 x 720 resolution display, 1.5 Ghz dual core CPU, 1GB RAM along with front and rear cameras the Novo 10 Hero looks set to be a popular choice for those wanting a larger tablet.

Although the price is quite low, Ainol have managed to fit the latest Android flavor in their new tablet, in this case 4.1 Jelly Bean, along with an impressively large 8000mAh battery which is said to offer 8 hours of video playback. 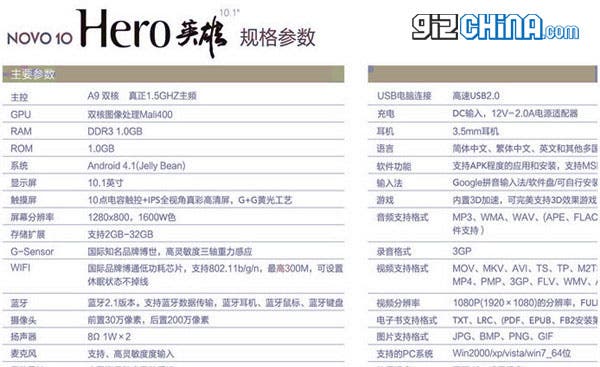 Ainol have also announced that they will launch the Ainol Novo 10 Hero II later in the year which will get a quad-core CPU and Android 4.1.1.