One thing which Chinese marketing teams love are cryptic Weibo messages, and you can get more cryptic than the recent post made by K-Touch CEO Rong Xiuli which hints at the following numbers “1234, 2345”, numbers which Chinese bloggers believe to relate to a low-cost 5-inch phone.

The 5-inch phone market is really kicking off, but most of the devices we have seen are high-end models with high price tags, with the exception of ZTE’s low cost U887, but now it looks like ZTE have a competitor in the low cost 5-inch segment. 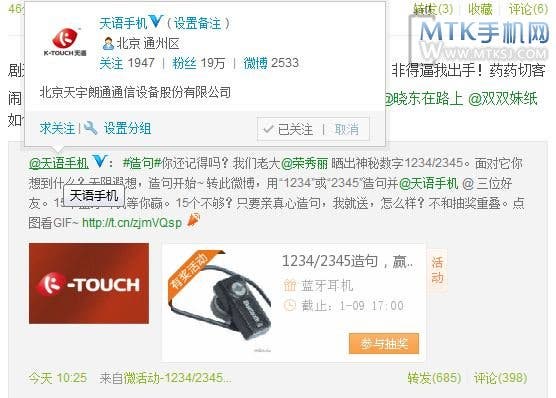 Sources close to Chinese brand K-touch are suggesting that a recent Weibo post made by the companies CEO hints at a new 5-inch K-Touch phone with a price as low as 1234Yuan ($198). At that low price we can expect a dual-core MT6577 chipset, 1GB RAM, 8 mega-pixel camera and even a 720 HD 5-inch display!

If this is the case then K-Touch will be one of the first large brand domestic makers to challenge the smaller factories in this competitive market place!

Next ZTE U935 5-inch phablet Gets Chinese Approval