A few days ago, Richard Yu at Hauwei was quoted as saying his company would launch the world’s thinnest Android phone, the Ascend P2 at MWC! Low and behold we have leaked photos of the purported world’s thinnest along with the new Ascend W2 Window’s phone.

When asked if the new Huawei Ascend P2 would be thinner than the 6.45mm Alcatel Idol (aka TCLS850) Richard Yu simply said “Yes”, while these leaked photos don’t confirm this, what we have heard is that the Ascend W2 spotted by GSMinsider measures 7.7mm, and we can’t imagine the P2 to be much thinner.

According to sources, the Huawei Ascend P2 will boast Huawei’s new Hass K3V3 quad-core processor built around an ARM Cortex A-15 architecture and running at 1.8Ghz! It is also expected to have a Full HD display, Android 4.1 Jelly Bean and 2GB RAM.

Huawei have gone for a Qualcomm dual-core processor and 1GB RAM for the Ascend W2, which will also feature an 8 mega-pixel rear came and 2800mAh battery. 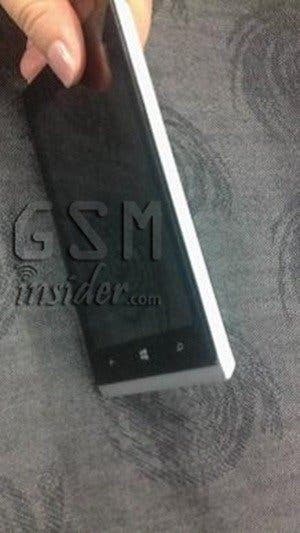 Next Huawei 6.1-inch Windows phone to make an appearance at MWC?