The original post has now been updated (below) after hearing from Androidguruz, THL and Oppo.

Update: This morning a spokesman from Androidguruz contacted us stating that this article was “wrong” and even provided copies of email discussions and the email address of their contacts at Oppo and THL.  Wanting to get to the bottom of this we contacted Oppo and THL to find out the truth for ourselves:

Sorry for all the confusion have caused by Androidguruz.

Hereby I clarified that Androidguruz is not our authorized distributor for India.”

That is the response from Oppo, who go on to say that Androidguruz had contacted them about becoming a distributor but talks are still in the preliminary stages.

“We havent given certificate of authorization of thl products for india company yet.”

So the truth is Androidguruz are in talks with both Oppo and THL, but neither company has made a decision yet. Let’s just hope that if they are given a shot they do a better job than the current UMi X2 launch!

Update 2: I have added screenshots of the emails we have received below:

Oppo and THL have spoken out against the much hyped claims the two brands will be entering India, raising concerns over India based phone distributor Androidguruz.

With the popularity surrounding Chinese phone brands, it has been easy for websites and phone fans to be swept away with excitement when they learn a new brand will be entering their home turf. This is exactly what has happened not once but twice in India, where phone fans are having dreams and promises dashed.

Earlier this month news that China’s Oppo brand would be entering India with the Oppo Find 5 hit the headlines. The news was short-lived as Oppo replied to the news with the following statement:

“This is not an authorised distributor, and this kind of dishonesty will undoubtedly stall our (Oppo) international development”

Fast forward to today and a similar story is breaking, but this time concerning Chinese mobile phone maker THL. Again reports have flooded in of an inevitable THL W8+ launch only to be disproven by THL themselves! 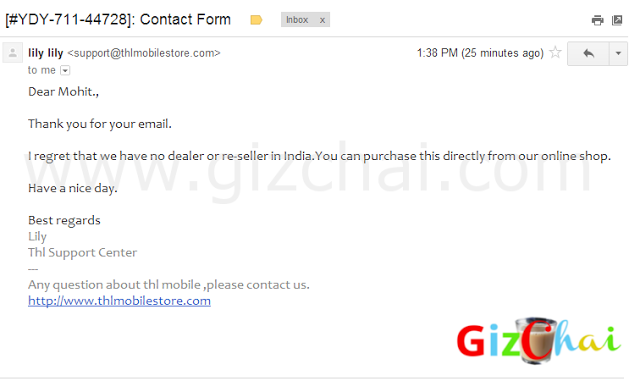 Both the THL and Oppo launch reports mentioned India based Andoidguruz as the company bringing the brands to the country. The same company who are currently under fire from angry customers for the UMi X2 launch!