Facebook Twitter Youtube
[templatic_contentbox type=”about” title=”Guest Post”] Guest Post: Last week we posted 5 ways in which you could get involved with the Gizchina community. Reader Will Fisher has been the first to take us up on the offer of writing a guest post. His excellent article follows! If you have an idea for a guest post please feel free to get in touch. [/templatic_contentbox]

The other day I decided to take the leap and purchase my first Chinese Android tablet. I’m travelling overseas next month and don’t fancy taking away my iPad with me incase it gets stolen, or more likely misplaced by me. I’ve also been fairly keen to brush up on my Android skills and am looking for something that will give me the freedom to connect hard drives and use micro SD cards – and hence ended up scouring the internet for a Chinese  Android tablet.

While I wasn’t interested in dropping a large sum of money on the tablet, I also didn’t want to be frustrated by ‘legginess’ and wanted the freedom to also try out some gaming on it. I basically set the limit of $100 USD and wanted to get as much bang for buck as possible.

My first port of call was going for as many cores as I could possibly afford and I fairly quickly stumbled across the Actions ATM7029 quad core processor, which had been cheaply shoved into a whole bunch of sub $100 tablets. 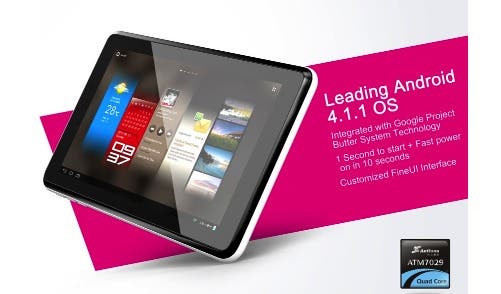 I had a quick Google and YouTube for the above mentioned tablets and managed to watch a few reviews of the AllFine Fine7 Genius quad core tablet being touted by online Chinese wholesalers. Jelly Bean looked smooth as butter and Antutu was running impressive benchmarks of around 13,000 points. I was sold. I looked for the cheapest store I could find that didn’t look like they were running scam and went to pull the trigger. On my way to the cyber checkout I was perusing other tablets as well and saw that quite a few dual core tablets were more expensive than the quad core tablet I was about to purchase.

At first I thought I’d just found a great deal and some suckers were getting less cores for more dollars and were being taken to the cleaners, but then I saw the AllFine Fine7 Air which was a very similar tablet to the Genius I was about to purchase but was advertised as a dual core tablet and cost more.

Smelling a rat and thinking something must have gone awry I began trawling Google for answers into the difference between the quad core ATM7029 and the dual core RK3066. Despite obviously having different amounts of cores and being manufactured by different companies (the former being Actions the latter being Rockchip) huge discrepancies and qualms began to emerge between the different processors with the general consensus on forums being that the dual core was in-fact a better Android experience than that of the quad core.

This notion and consensus goes against everything I understand about processors and almost everything I know about the tech world in general. How can more cores be less powerful than less cores?

After digging around on the internet for what seemed like weeks I got to the crux of the debate between the two chips and essentially it came down to three major factors – technical core power, app compatibility and the graphics processor unit each processor was touting.

All these three issues were interconnected with each other but each of the issues time and time again proclaimed the dual core RK3066 the victor.

Never being one to purchase any device without exhausting all the possible research the internet could provide I dug as deep as I possibly could into the world of Chinese tablet processors and realised there was a bit of a conspiracy emerging to create quad core processors which weren’t as great as they seemed.

The ATM7029 has made a cheaper quad core processor by licensing out cheaper cores hence why the AllFine Fine7 Genius can have a lower listing price than its dual core brother the Fine7 Air.

At this point my eyes felt weary (probably in a similar vain to how your eyes feel now), but one problem was still stuck in my head, how could the quad core ATM7029 be scoring so well in the Antutu benchmark scores? Antutu is the ‘bees knees’ of benchmarking in the Android world and I had seen first hand videos of quad core ATM7029’s scoring 13,000+ points in the app, how could this be? The answers was in-fact pretty simple and addressed by Antutu themselves a little while back on their website.

On April 10th 2013 Antutu wrote a short news post explaining that certain tablets had been manipulating results within Antutu to score high rankings. Antutu stated that ‘the real score is only half of the score it displays’ and the only real way to test the store is to run the test yourself using the most up-to-date version of Antutu.

Upon reading this Antutu news post the issue of technical core power made sense and it was fairly clear to see how the dual core RK3066 actually outperforms the ATM7029 and why it attracted a higher price at market.

While researching the core power of the ATM7029 I also began stumbling upon issues surrounding its compatibility with certain apps in the Google Play store. Coming from an iOS world this seemed quite strange to me. As far as I am concerned, unless you were using some old school iPhone everything in the App Store should work on almost all devices, despite perhaps not working as smoothly on some as it does on others. 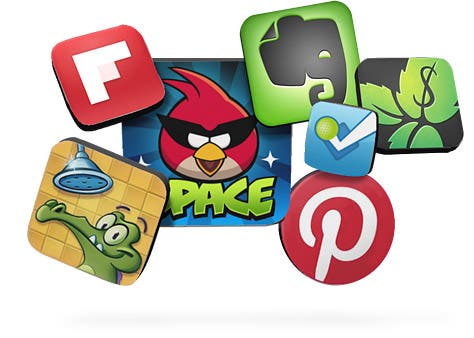 In the Android world this isn’t the case. Google Play can make executive decisions about which apps are suitable for which devices and from quite a few different reports from forums the ATM7029 was running into trouble with this.

The main issue surrounding this compatibility downfall of the ATM7029, from my understanding (which is definitely limited at best) is the use of the GPU within the chip. Moving away from the widely used and optimised GPU of the Mali-400 the makers of the ATM7029 chose to go with the lesser known Vivante GC1000, a GPU chip that, from my research not many people know much about. Using a lesser known and lesser supported GPU chip is making the road for the ATM7029 very difficult and has the potential to make the overall Android experience for the average user a less than enjoyable one – I’m imagining my Dad slapping the tablet in frustration as apps don’t install.

Two possible outcomes could emerge from the GPU issue with the ATM7029. Either developers begin optimising for the Vivante GC1000 and the GPU source code becomes more widely accepted or the entire GPU burns out as a dud, either way, this wasn’t the GPU I wanted powering my Chinese Android tablet.

Overall my journey to a sub $100 Chinese Android tablet has been a journey of much learning, frustration and just enough conspiracy to keep even the biggest Android skeptic interested in how things shake out.

As more hands on reviews and experience emerge with the ATM7029 we’ll understand what this all means for the average real world users of these tablets, and who knows, maybe everything I’ve written in this article will be non consequential to the end user experience.

For the record I went with the dual core AllFine Fine7 Air with the RK3066 chipset. I picked it up for a smidgen over $100 USD and it’s currently in transit from China. I’ll list a full review when I get my hands on it.

[templatic_contentbox type=”author” title=”About the Author”] Will Fisher is a website developer, writer and designer from Australia, he spends most of his money on tech things he probably doesn’t need. You can find him at willfisher.com.au. [/templatic_contentbox]

Next Neken N6 to be updated to Turbo MT6589T spec