August 16th approaches and as any self-respecting Xiaomi fan will know that is the date Xiaomi are expected to launch a bunch of great products including the Xiaomi tablet.

As with all future Xiaomi products, rumours have been piling up regarding the Xiaomi tablet from built-in 3G, 7-inch displays, MTK processors and now even a Tegra 3 chip. 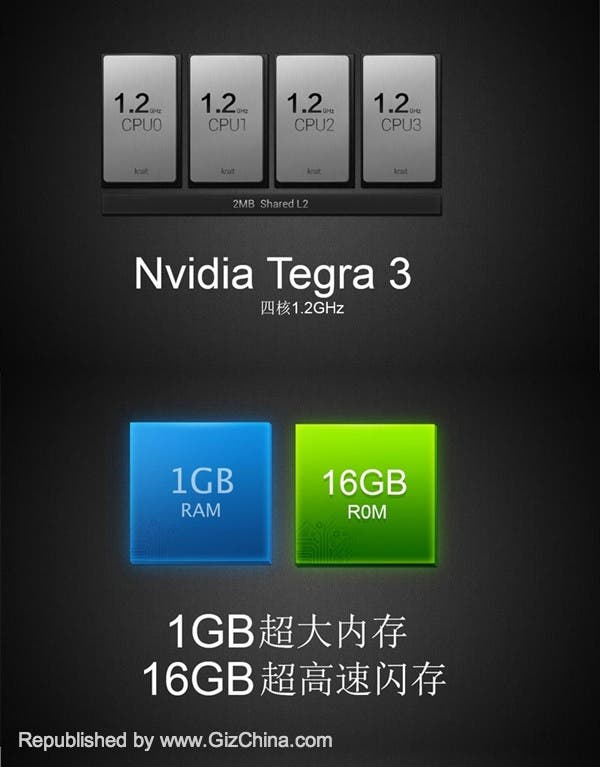 Todays details come by way of rather dubious looking specification slides and images, which we aren’t entirely sure a genuine. Anyway were as excited as most about the possibility of the Mipad and find the hardware details quite interesting.

Just as with all the other rumours these specs show a 7-inch 720p display, built-in 3G packed in to a iPad mini styled ultra-portable mini tablet. Earlier reports suggested that the Xiaomi tablet would run on a Mediatek MT8125 chip however these details tell of a 1.2Ghz Nvidia Tegra 3 processor, 1GB RAM and 16GB memory. To top it all off a 13 mega-pixel rear camera acts as the main camera.

The Xiaomi tablet is thought to cost 999 Yuan ($160) when it goes on sale in China and will likely launch around the same time as the Xiaomi Red Rice we reported on earlier and the Xiaomi Mi3.

Next Nexus 7 2 vs Xiaomi Mipad tablet