Chinese manufacturers, notorious for their low-cost clones of popular devices like the iPhone, now have some competition to deal with; and it’s coming from a close neighbour, Japan!

Japanese manufacturer iosys recently unveiled a smartphone that goes by the name of ioPhone5. It isn’t very difficult to guess that the device is an impersonator of an iPhone, the iPhone 5C in particular. Under the hood is where the departure from the real iPhone starts taking place; the ioPhone5 features Mediatek’s low-cost solution, the dual core MT6572, which is forced to eat humble pie by Apple’s A6 which powers the iPhone 5C. 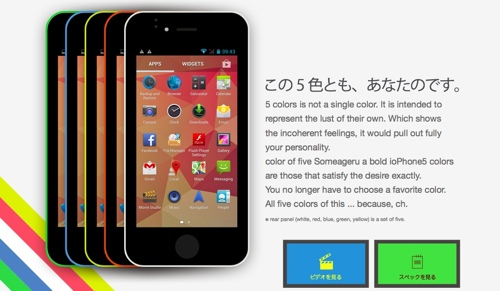 Other specifications of the device comprise of a 4-inch 854 x 480p screen, 512MB RAM and 4GB ROM. The ioPhone5 runs Android v4.2, which surprisingly does not feature an iOS style theme and icon set. Just like the Apple counterpart, comes in 5 colours, namely White, Blue, Green, Yellow and Pink.

Next This week I helped my brother buy his first Android phone, this is what he bought!