We have previously covered the news that the Oppo Find 7 will boast a so called “Super Display 2.0”, here are a few more features the 5.5-inch panel will offer.

The Oppo Find 7 could well be the first 2K phone available for customers outside of China. While having an impressive resolution of 2560 x 1440 on a 5.5-inch panel should mean a seriously crisp viewing experience it isn’t the only feature of the new panel.

Oppo China have released the following teaser explaining some of the features. Apparently the Find 7 Super Display will be super sensitive allowing for use with wet hands, when wearing gloves and will even operate when thick leather gloves are worn. Great features for anyone venturing out in to the cold. The panel will also be immune to electro magnetic forces caused when charging. 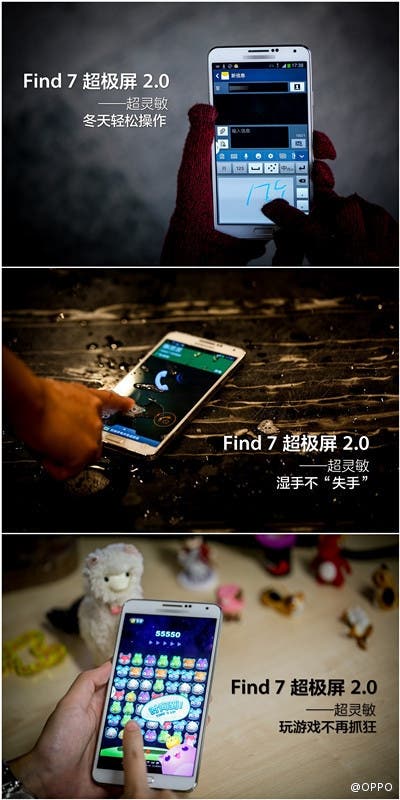 Obviously Oppo haven’t shown the Find 7 in the images but rather demonstrate them on a Samsung Galaxy Note 3.

The Oppo Find 7 is believed to run a Snapdragon 805 processor, have at least 3GB RAM and 4G LTE support.

Next UMi X3 gearing up for Chinese New Year launch?