UMi have officially announced that their flagship UMi X3 octacore smartphone will go on sale mid-March along with the UMi X1 Pro smartphone.

On one hand it is wonderful to see a confirmed date for the octacore UMi X3 but on the other hand we can’t help but wonder just why it is taking so long for the phone to go in to production. Leaked photos of sample models have been spotted as late as 2013, and just this morning pricing for the phone in Hong Kong was announced, so what is holding up the international launch?

The mid March launch could have been due to the recent announcement of the 4G LTE equipped MT6595 processor, however UMi only mentioned the phone would have 2GB RAM, 16GB memory with no mention of the updated processor. In addition the specifications from Hong Kong state a 2Ghz Octacore chipset while the MT6595 has slightly higher clock speeds. 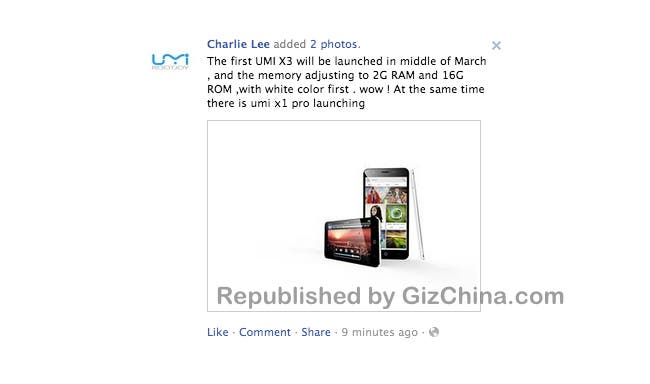 Could the delay be due to the 5.5-inch 1080p display which UMi are saying is the same panel used by LG on some of their upcoming flagship models?

The X3 won’t be the only mid March launch as the UMi X1 Pro is also going to go on sale at the same time. The X1 Pro is an all new design of phone rather than update of the original X1. Specs will include a 4.7-inch 720p display, 1GB RAM and 1.3Ghz quad-core MT6582 processor.

Again the X1 Pro had been spotted late last year, and we can’t help but wonder again why the launch has taken just so long.

Will the Umi X3 or X1 Pro be phones which you will be personally hoping to buy? Or will you hold on for the first MT6595 phones to hit stores?

Next Samsung S5 to come with bezle-free display