The GooPhone V92 takes the popular iNew V3 and gives it a whole new lease of life with top of the range hardware, but are these specs accurate or is it too good to be true?

If you were to look at the photo above you would say that it shows the iNew V3, a 5-inch Android smartphone with quad-core MT6582 processor, however you would be wrong.

This phone is in fact the GooPhone V92 pro, a phone built around the iNew chassis, but with a much higher (and difficult to believe) level of specifications. For example the standard processor has ripped out and replaced with a 1.7Ghz MT6592 chipset, there is 2GB RAM rather than 1GB, 32GB of internal memory , plus it is claimed to support 4G LTE (although the MT6592 chipset cannot!). 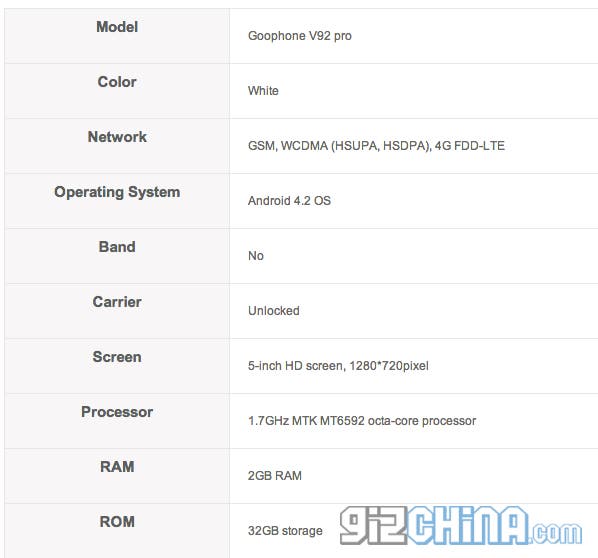 Not everything has changed though. The screen is still a 5-inch 720p unit with Corning Gorilla Glass, the rear camera is the same 13 mega-pixel, there is NFC and most worrying of all the phone has the same 1830mAh battery as the quad-core version!

We don’t know what to make of this phone. Did someone update the GooPhone site ahead of the MT6592 launch and haven’t bothered to fix it, or is this a phone which will launch with the newer MT6595 chipset which does have 4G LTE? Either way you can see the full specifications here where the phone is priced at $350!

Next Oppo Extravagnza offers Ofans the chance to win an Oppo Find 7!