Although a Xiaomi tablet that’s allegedly in the works has shown up multiple times in the past, rumours around the same have died down in the recent times.

However, folks at Webtrek.it only recently reported about a 9.2-inch device which appeared on the GFXbench database and which is believed to be the very Xiaomi tablet in question. Even if it is the real thing, specifications are far from insipring and probably aimed at sensitive, emerging markets. Xiaomi have shown renewed interest in expanding shores which makes pieces of this puzzle fall in place perfectly. 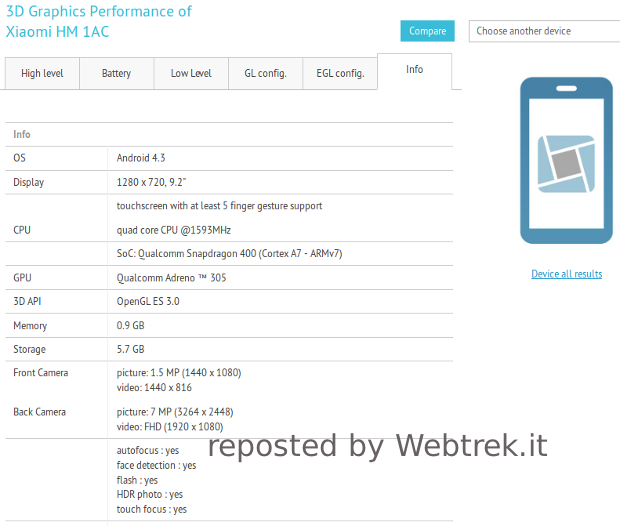 A picture, allegedly a screenie of a GXFbench listing tells us what might comprise the first ever Xiaomi tablet. As seen above, it says that the device has a 9.2-inch 1280 x 720 pixel display, a quad-core 1.6GHz Snapdragon 400 processor, 1GB and 8GB of RAM and on-board storage respectively. It also gives away imaging hardware info, which supposedly is made up of an 8 mega-pixel rear and a 1.5 mega-pixel front camera.

Word going around also suggests that the 9.2-inch Xiaomi tablet feature 3G and voice calling apart from the usual connectivity radio. Of course, like any other Xiaomi smart device, the Xiaomi tablet too is expected to run on their on Android dessert, MIUI.

Xiaomi have kept mum about a tablet project which has been doing rounds of the rumour mill for quite a while. Can we take this leak for concrete evidence?

Next Huawei working on a new 2K phone