Could a new 2199 Yuan Xiaomi phone running MIUI V6 be on the cards for this year’s annual Xiaomi festival?

The above (rather dubious looking) banner was reportedly spotted in Beijing and claims that a new Xiaomi device will be unveiled on 2nd April. The only details mention on the banner are the, higher than usual, 2199 Yuan price, MIUI V6 and an outline design of a new Xiaomi Android phone with narrow bezels all round. 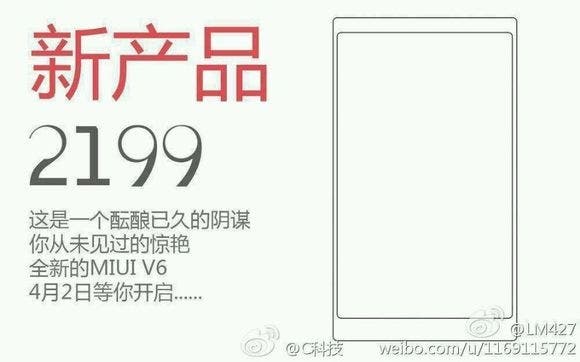 Xiaomi are generally quite good at keeping their new phones secret and are also known for keeping the prices of their flagship phones unchanged at each new launch, so the details seem a little fishy to us. What do you guy’s think of these purported leaks?

Next Xiaomi Mikey, a copy of Kickstarter's Pressy?