Huawei’s Ascend P7 leaked yet again as screenshots of the device’s AnTuTu numbers made their way online.

The smartphone has been in the news for quite some time now thanks to leaks that keep appearing on a regular basis. We don’t know for certain if this is a deliberate ploy from the Chinese maker or sheer laziness, but whatever it is, seems to be doing the trick.

The Ascend P7 will be succeeding the P6, which as we’re aware, has found quite a few takers for its exceptional (during the time it was launched) design/form. The Ascend P series is, in a way, a flagship series for design and not specification, as far as Huawei are concerned. With a nice balance between looks and pure grunt, the P6 sold quite well in multiple markets; Huawei would want to repeat the success with the next iteration. 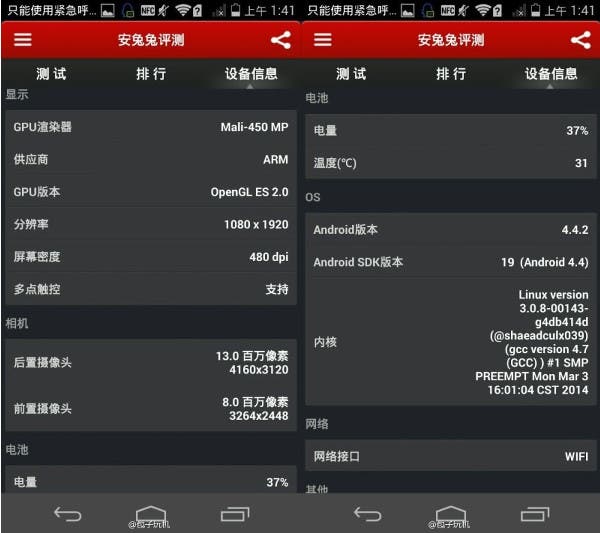 The aforementioned leaked screenshots that we speak of suggest that the P7 too, won’t be a flagship killer in any manner. With a score of just 24883 points, the device will have to have more than just a sleek design to attract buyers.

What these screenshots also convey is the fact that the P7 will rock the Kirin 910 in-house processor from Huawei, along with the popular Mali 450MP that also features on the octa-core MT6592. With 4 cores, the CPU is shown to be operating at up to 1.8GHz, something not too exciting for today’s day and age.

These screenshots also confirm what was already known — a full HD screen 2GB RAM and 16GB that the ‘Sophia’ was touted to feature. We would like to believe the rather low-ish scores are the result of a not very well optimized firmware that the prototype is running. You can expect the AnTuTu scores to go up by 10-15% at the time of release, when the engineers get around to using more optimized code.

The Ascend P7 is set to be officially unveiled May 7th.

Next Camera Comparison: OnePlus One vs. OPPO Find 5 vs. Nikon D3100