Another MediaTek powered, affordable smartphone has made its way into the Chinese market. This time though, there’s a little extra thrown in, in the form of an attractive design.

Although some would argue that the design is reminiscent of the iNew V3 (which has more admirers than you can think of!), we think it is different enough to not be called a clone. At just 599 CNY ($96), the device is among the more affordable quad-core phones from China. 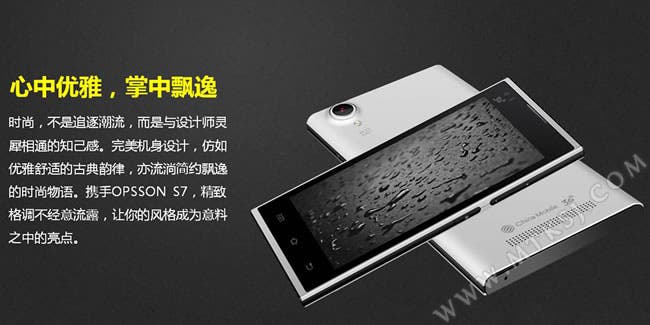 Heading the show is a 1.3GHz MT6582 chipset from MediaTek, something which we’ve seen in the majority of the low-cost quad-core phones from China in the recent months. This is accompanied by the standard 1GB RAM and 4GB ROM (which now seems like a mere formality), with a microSD slot for further expansion.

A 4.7-inch display tops it all with a 1280 x 720p resolution, making it one among the smaller devices to have seen a release in the recent past. Other specifications of the smartphone include an 8 mega-pixel rear camera, a 2 mega-pixel front camera, and a rather disappointing 1600mAh battery. The device still runs Android v4.2, while many of its MediaTek counterparts have already made the much needed shift to Android v4.4 KitKat.

Unfortunately, the OPSSON S7 doesn’t support WCDMA frequencies yet, with no word on future compatibility (I wouldn’t bet my money on it getting WCDMA support). For those who can do with just GSM networks, keep an eye on your favourite reseller and have $120-130 handy.