Micromax just announced a new wave a budget smartphones in the form of the ‘Canvas Win’ series. As you’re probably aware already, Micromax’s Canvas series, until now, consisted of Android powered smartphones which are hugely popular in its home country. Now that Microsoft has gone easy with Windows Phone licences, Micromax (and a few other upcoming smartphone and tablet makers) decided it would be worth launching WP devices in a market ruled by the Android OS.

Both devices feature a quad-core 1.2GHz Snapdragon 200 CPU and 1GB RAM, with version 8.1 of the Windows Phone OS taking charge of the software side of things. Micromax had announced earlier this year that the company had partnered with Microsoft to provide affordable WP smartphones later the same year.

With our vision to democratize technology and belief in providing consumers with choice of platforms, we are pleased to introduce a new range of Windows-based phones. I am pleased that Micromax is the only Indian mobile phone brand to be present across the two most popular operating platforms in the world. Micromax’s innovative demeanour and belief in strong partnerships has culminated in today’s launch powered by Microsoft’s UI enriching platform and Qualcomm’s next generation processor. We will continue to introduce products and services that simplify and enhance the data experience of consumers across markets.

Although neither of the two smartphones are flagship killers in any manner, both devices should help the WP OS get a wider reach.  In a developing market such as India, a foothold at this time could prove instrumental. We will know, with time, how it works out for Micromax, Microsoft and the consumer in general.

You can find full phone specifications listed below. 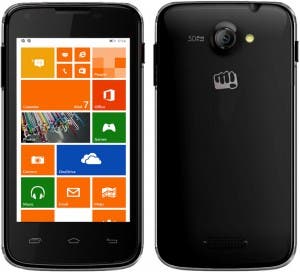 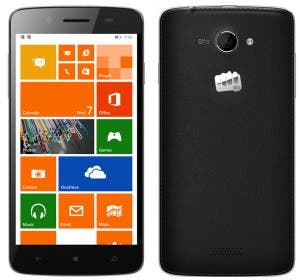