In a world of cookie cutter phones the DOOGEE DG800 Valencia is a breath of fresh air, a phone with unique features and great design!

The mid-range Chinese phone market is flooded with rebranded models of the same phone with the same specs (how many iNew V3 rebrands have you seen?), what the market is crying out for is something a little out of the ordinary, something new to compete with the stale!

The DOOGEE DG800 Valencia wants to be that phone. It has a pleasing design, sensible hardware and some neat features which really help it stand out from the rest. 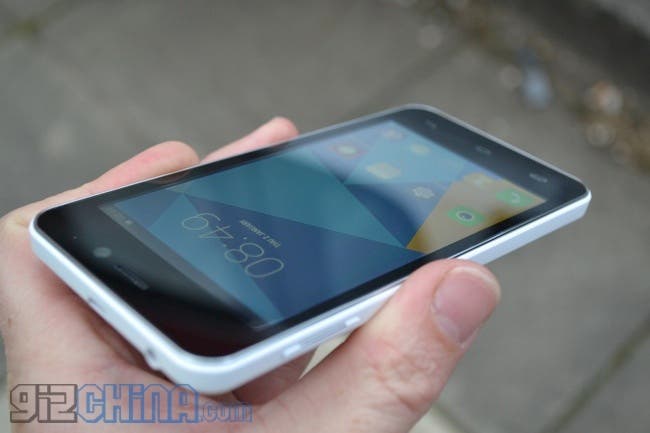 DOOGEE have been clever to give the DG800 a mix of useable hardware at an affordable price without compromising performance. All too often we come across a phone which could have been great but due to some short-sightedness here and there manages to miss the mark, the DG800 isn’t one of them.

As you can see from the table above the specs for the DOOGEE DG800 Valencia are spot on for the price and easily match what the competition have to offer.

Features including the rear touch panel, which offers unique operation and navigation, and Android 4.4 Kitkat are also welcome additions to a phone of this calibre.

Upon unboxing the DG800 it becomes evident that DOOGEE want the user to express themselves. The options in the box include the standard white case with touch sensor, or an optional cover with a triangular pattern that comes without the rear sensor. Optional covers are also available too. 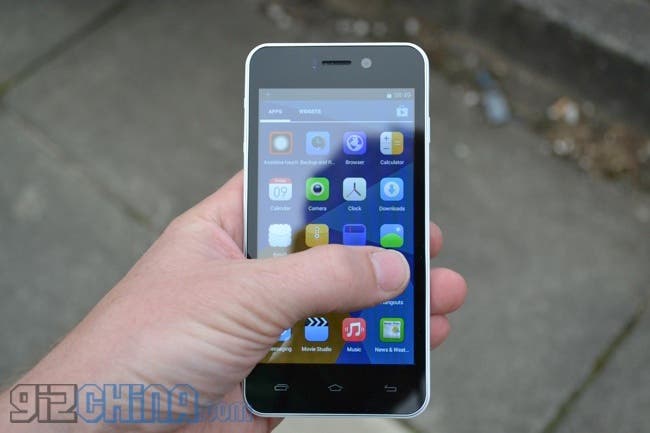 With a 4.5-inch display the DG800 isn’t big enough to feel large in the hand even with the rather thick bezel around the screen. Bezel thickness has been a big talking point in phone design this year, but for a phone at this price I’m happier to get a slightly thicker phone for the added drop protection and features the phone offers as a whole.

The DG800 measures 135 x 66.9 x 8.2mm, not a super slim phone, but about average for a 4.5-inch phone of this price. With the flat rear and rounded edges, the phone sits nicely in the palm of your hand or on the top of a flat surface. 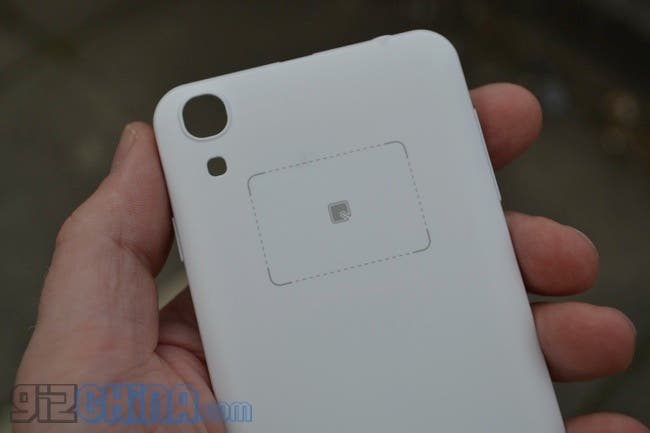 As you would expect, one-handed operation is a breeze with my thumb easily able to extend across the phone to reach apps even in the furthest corner of the display. One handed operation is aided furhter by the inclusion of the rear touch panel. The rear panel can be used to swtich from screen to screen, as a shortcut to the settings and even to take photos. 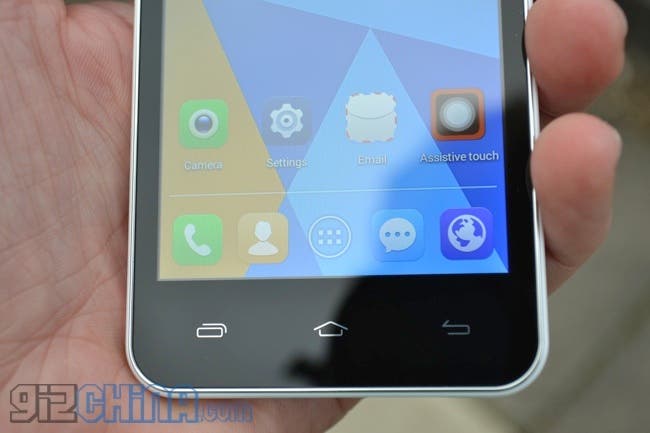 A quick tour of the phone shows us a front facing camera just above the 4.5-inch display, and 3 capacitive non back-lit buttons below.

The rear has the 13 mega-pixel sensor, rear touch panel and a small grill toward the bottom for the main speaker. 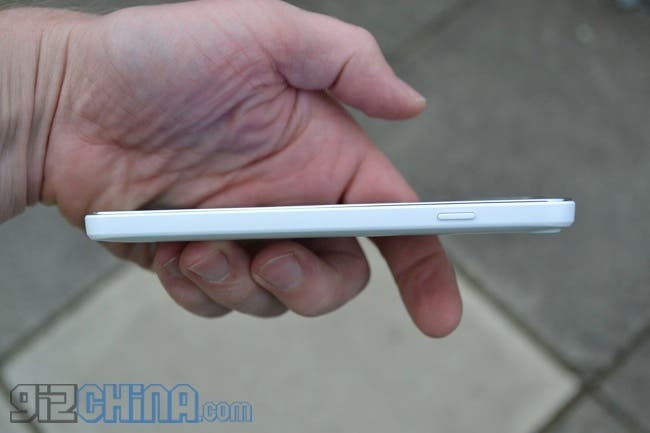 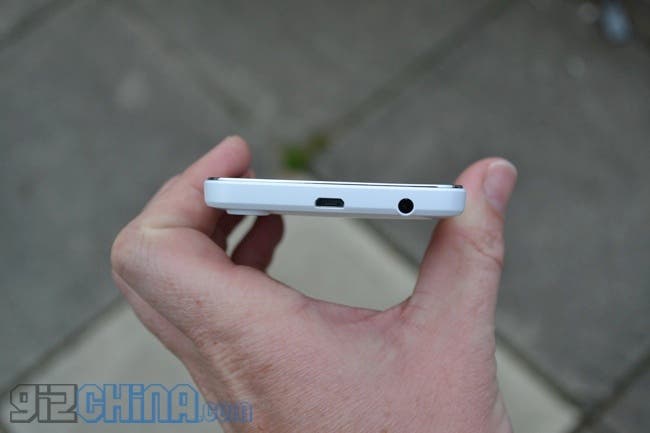 The micro USB plug and 3.5mm headphone jack are found at the top of the phone. I personally prefer the USB in the base, but this is personal preference and makes no difference to operation. 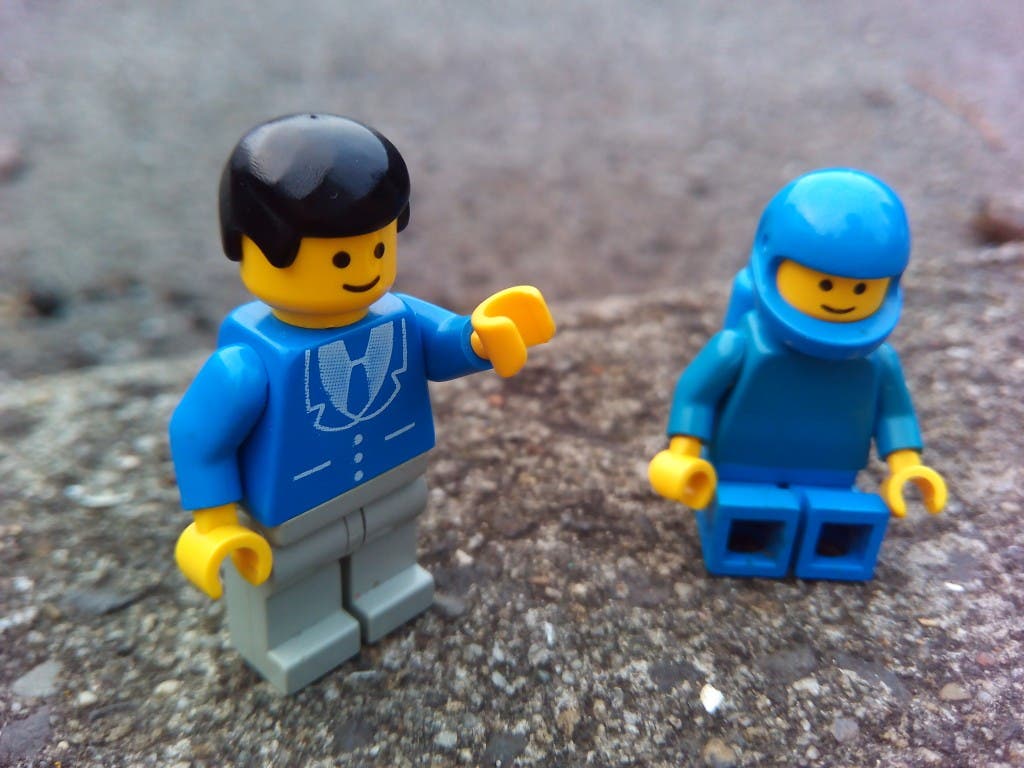 From the official DOOGEE website the camera hardware is listed as an 8 mega-pixel 88 degree wide-angle from camera and 13 mega-pixel rear. The rear camera has auto-focus, a single LED flash and f2.2 aperture. An aperture size of just F2.2 isn’t going to set the photographic industry ablaze, but don’t let the specs put you off as the rear shooter is quite the capable performer. 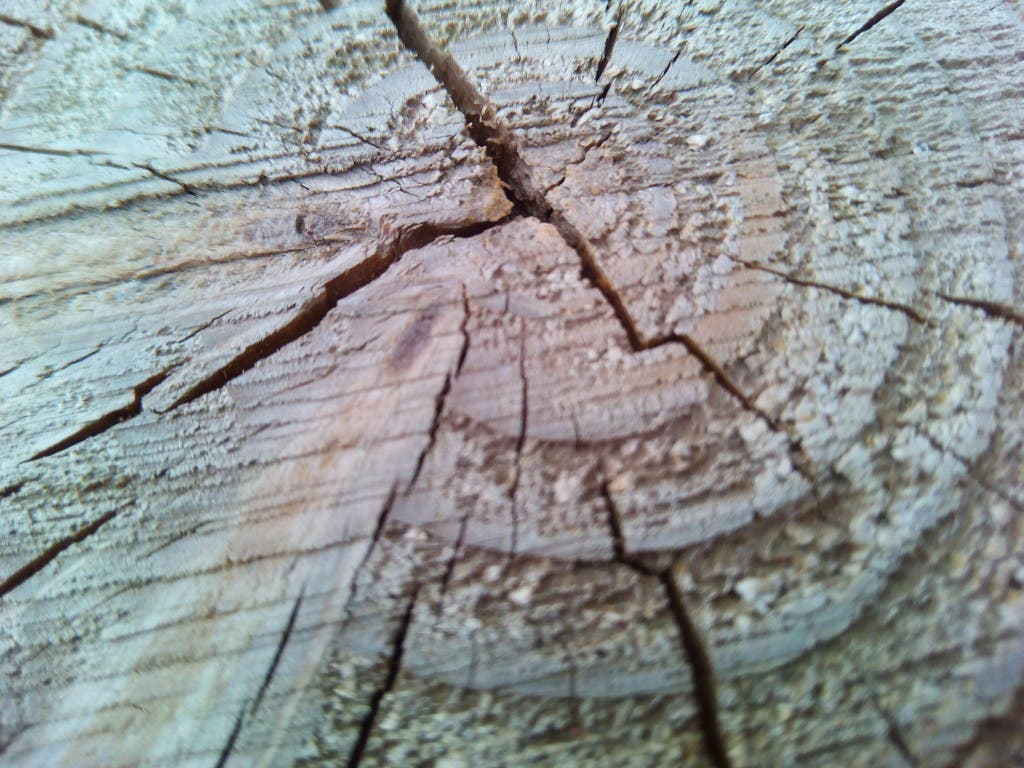 Surprisingly the rear 13 mega-pixel camera performed well even in low-light conditions with much less noise than we expected. In daylight the camera is capable of some really lovely shots, and macro mode is impressive too. I only tested the default camera app, but as the DG800 runs Android 4.4 Kitkat you could easily install Google’s own Camera app instead.

With a 2000mAh battery providing juice we can’t really expecting days of battery life from the phone. In our tests we found that a days of regular use (camera, 3G data, calls) ia about all we coulc scrape through on a single charge. If you start to mix in gaming, video and audio playback to your day then you should keep a USB cable handy for a battery top up. 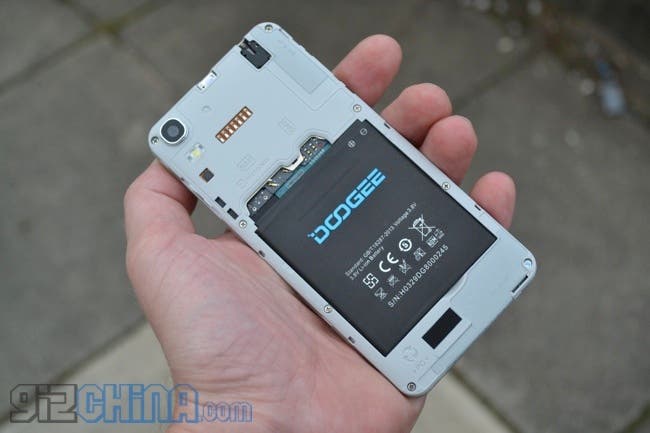 Looking over the hardware, which includes a low energy screen and efficient processor, we believe the lower than expected battery life is due to the optimisation of the Android 4.4 Kitkat OS. Being one of the first companies to launch a budget phone with Kitkat could be part of the reason, we hope updates will improve things.

The DG800 Valencia is marketed as a 3G smartphone, but this being a Chinese device you will always have to be careful when buying the phone as different countries support different networks.

On the box the DOOGEE DG800 Valencia is said to support WCDMA 850/2100 and GSM 850/900/1800/1900. What this basically means is that smartphone users in the U.S and North American are going to find very limited WCDMA 3G support, although phone calls over 2G GSM should work. European and Asian customers are going to have better luck with 3G with the DOOGEE DG800 Valencia and will find many networks which will work on the phone.

Android 4.4 Kitkat is what we really like to see on Chinese phones and it is especially nice to see that DOOGEE have managed to port the ROM on to the budget DG800. 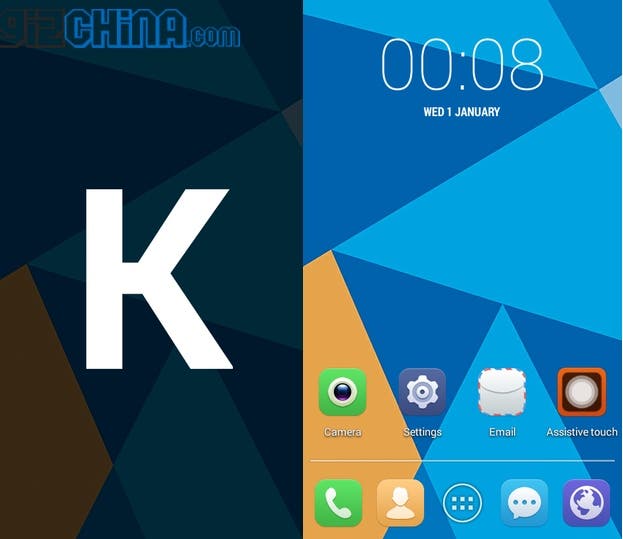 It isn’t a pure stock install however as the launcher has been customised slightly and DOOGEE have added support for the rear touch sensor plus gesture controls allowing you to flick from screen to screen or song to song. 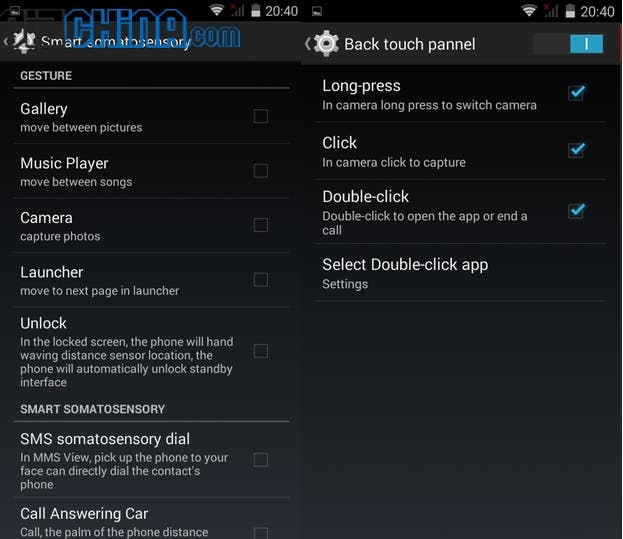 The Google Play store and Google services are installed as standard so you can easily login to your Google account and download your apps to get you started.

The DOOGEE DG800 Valencia isn’t marketed as a power house, yet it still manages to perform very well for a phone costing below $150. Much of the performance is thanks to the quad-core MT6582 1.3Ghz processor which only has to push around pixels for a 540 x 960 resolution display rather than a HD panel. 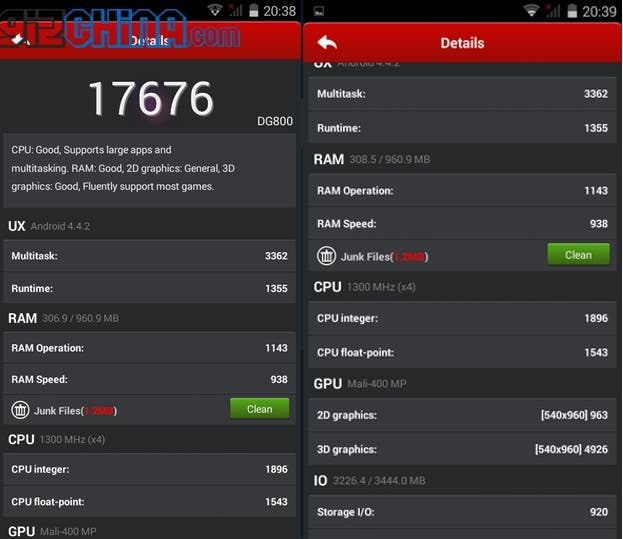 Switching from app to app, screen to screen, function to function the DOOGEE DG800 Valencia really performs admirably, better than the price tag would have you believe. There is no stuttering or slowing of apps, everything is handled in a timely manner. Obviously you cannot compare the speed, or the multitasking capabilities with a Snapdragon phone with 2+GB RAM, but for a phone with a price tag close to $150 you really will be hard pushed to find better.

Everything else runs amazingly well on the DG800. There is nothing which we don’t like (as long as the battery life can be improved) about this phone! It is priced well, has great hardware, surprisingly good cameras, and some nice features that you cannot find on phones costing twice as much. 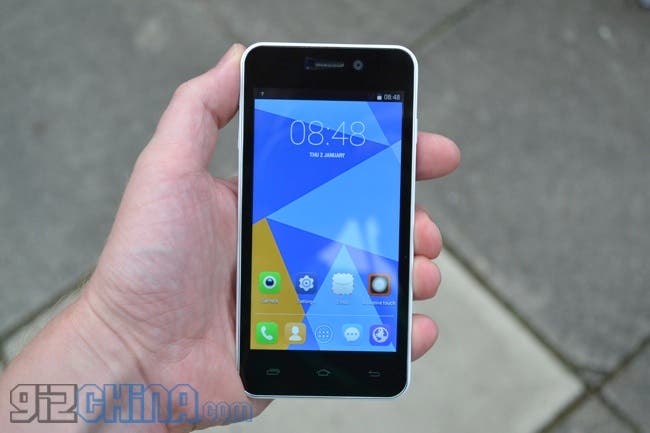 The DOOGEE DG800 Valencia would suit customers who are looking for their first Chinese Android phone, or even for more advanced Chinese phone users who want to try a Kitkat phone out on at a low price. The DG800 Valencia is the phone which other DOOGEE phones, and other similarly priced devices will be compared to, if they can just optimise the firmware to improve battery life the DG800 could easily become our most highly recommended sub $150 Chinese phone of 2014!

Thanks to DOOGEE.cc for providing the review phone.