Hot on the heels of compatriots such as Vivo and OPPO is Alcatel, international wing of China’s TCL with a smartphone that touts (you guessed it)… a 2560 x 1440p aka QHD display.

Found on the GFXBench database earlier today, the Alcatel One Touch D820 is a smartphone that is expected (or not?) to feature a rather generous QHD resolution on a small-ish 4.6-inch screen. If true, the One Touch D820 will require you to be a superhuman in order to discern between pixels, because they’re going to be packed insane tight. A quick calculation returns a figure of 638ppi, something so high, it’ll hurt your eyes.

The fact that the device is listed with a QHD display sort of speaks volumes, and that it is going to be a flagship. For that, Alcatel have included 3GB of RAM, 16GB of internal storage, and a MediaTek MT6595 processor that should not only give it some much needed power under the hood, but also keep costs low thanks to mass manufacture and other factors.

Other than that, this super phone is expected to feature Android v4.4 KitKat out of the box (quite a win when you consider the chipset that’s powering it) and LTE support of course.

Even though GFXBench says the rear camera is a 7 mega-pixel sensor, we’re told it usually underestimates camera resolutions. We’d put our money on a 13 mega-pixel sensor at least; even anything above that shouldn’t be a surprise considering trends from the recent past. 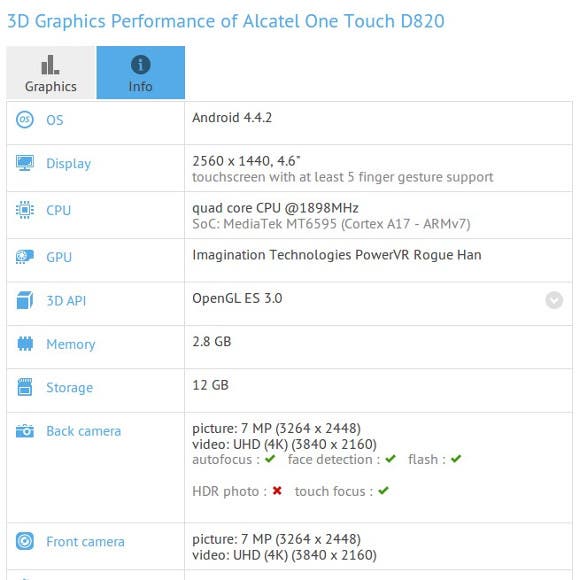