When it comes to Chinese phones, we have an insane amount of devices to choose from. But most of you will probably agree that only a minor percentage of all these phones are really stand out from the crowd. Well, today we are take a look at one of these ‘stand out’ devices, the JiaYu G5S.

Yes, it is not exactly a new phone. JiaYu actually released the G5 last year with a Mediatek quad-core SoC. This year however they gave the phone a little hardware upgrade to the MT6592 octacore processor. The available models also changed, gone is the 32GB version and instead there are the 16GB with 2GB RAM and a 4GB model with 1GB RAM, but this has allowed JiaYu to drop the price too.

Over the past 5 days we had the chance to put the octacore JiaYu G5S 16GB model through a patented GizChina review. Here are the results.

JiaYu G5S: What’s inside the package? 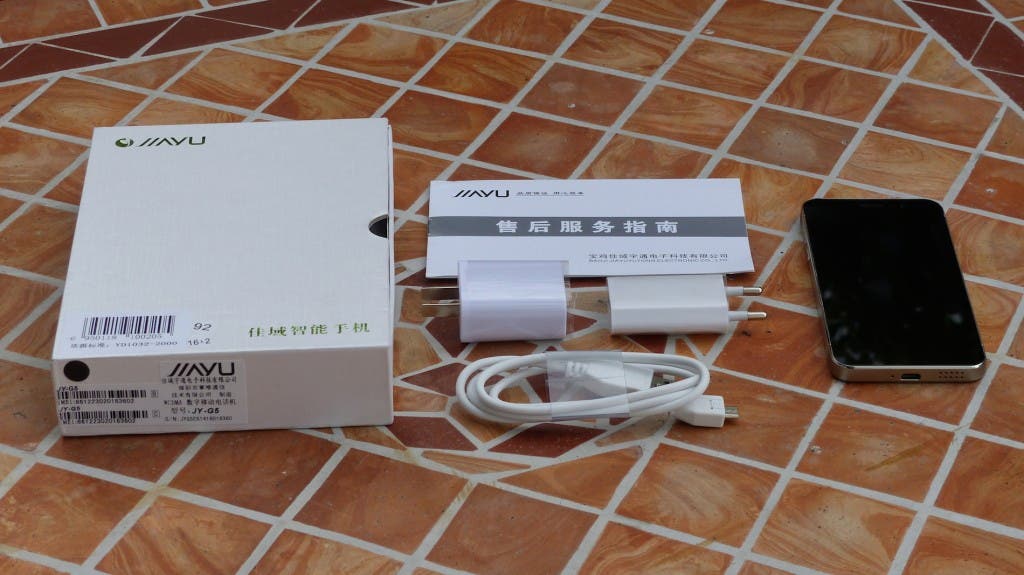 If you own a JiaYu G5 already, or have seen a review of this phone before, then you will surely recognize the packaging of the stainless steel phone, as it simply is the same box. So let’s have a look at the package contents which include a good length white micro USB cable, a Chinese mains charger (plus EU adaptor), and finally a warranty card. There is no user manual, headphones or screen protector this time, which is a bit disappointing considering the price.

Now as already mentioned before, the JiaYu G5S definitely stands out from the crowd of Chinese phones. The main reason for this is the body of the, which is made almost completely from stainless steel. You won’t find any plastic piece on this phone, except two black elements on the upper and lower of the rear (which actually help to improve WIFI, GPS and data signals). This not only looks beautiful, but also adds a certain degree of toughness to the phone. The only negative of the design could be the iPhone appearance of the phone, get past that and you have a very well made device.

On the front you will notice the phone call speaker at the top along side an LED notification light (controllable with LightFlow from in the settings), a light sensor, proximity sensor and of course the front facing camera. A 4.5-inch screen is next and below that you can find three touch buttons with back-illumination – no light bleeding visible here.

A quick look at the sides uncover two buttons for volume control on the left, and micro USB port with OTG support, microphone  and the speaker for media on the base. The right side gets a small switch to unlock the back plate of the phone, as well as the power button. The last detail is the top mounted 3.5mm headphone jack.

In the top back plastic element is the main 13 mega-pixel camera and LED flash. Between this area and the lower plastic section is a removable stainless steel plate where you will find the removable battery, micro SD slot and dual SIM slots (normal + micro). To differentiate the G5S the removable plate has a matte black finish where as the regular G5 does not.

Sizes don’t change so the dimensions are the same 130 x 64 x 8mm. At 161g the octacore JiaYu G5S is substantial rather than heavy, the weight adding piece of mind that your phone is well made and should last the course.

The 13 megapixel rear shooter of the phone captures light via an aperture of F/2.2. Images do look quite good considering that this is a Chinese phone in the lower mid price range. They have a really natural color reproduction, good depth of field, they show a lot of details and the camera does not seem to have any huge issues with direct light sources or light from the sides. Another plus is that both focus and shutter times are rather fast. The LED flash also does a pretty good job, at least up to mid-sized rooms. The only real downside is the level of noise, which is omnipresent and is gets more of an issue the less light there is.

Videos can be recorded at up to 1080p and are good quality with almost no lag. Audio quality is also acceptable.

As for the he front camera, this is only a 3 mega pixels unit, so you shouldn’t expect that much from it. But yes, it’s good enough for video calls / chats or those times you need to take an emergency selfie. Below are some sample pictures for you to have a look at.

Regarding the camera app we have to say that it is mostly the stock Android camera app with a little redesign. It does have some nice features like HDR, panorama and so on, but nothing out of the ordinary.

Everyone who has ever used a MT6592 phone is probably aware of the fact that this processor is quite energy-consuming despite of its energy-efficient Cortex A7 cores. Unfortunately a lot of octacore MT6592 also suffer from having a battery of just 2000mAh, this usually isn’t a great combination. The good news is that although the octacore JiaYu G5S also gets these component choices the battery life is much better than expected. 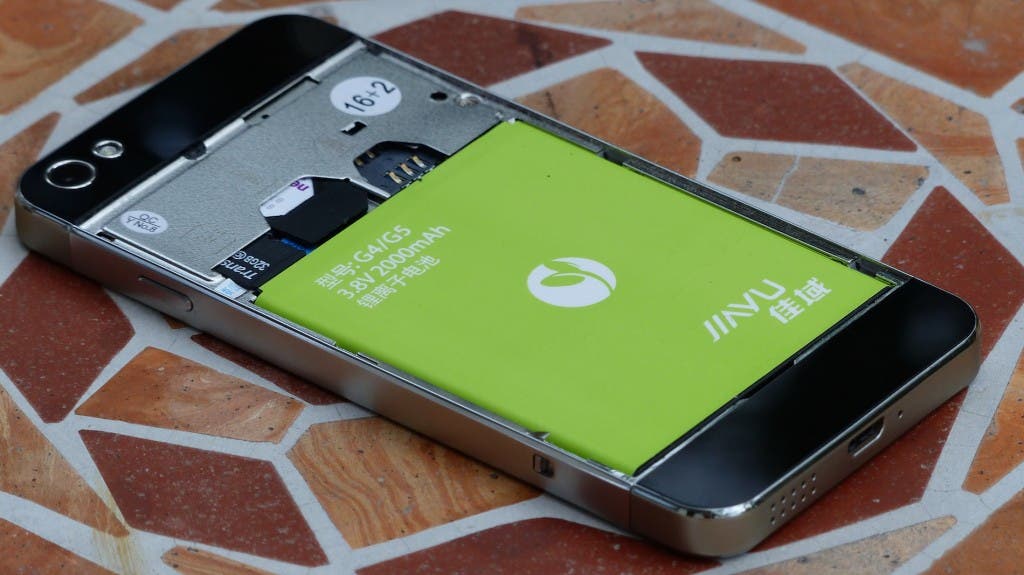 This is probably caused by the enabled power saving mode of the processor and the smaller screen size. So during normal usage you will get easily over a day with a fully charged battery, during our test we even reached one and a half day most of the time. Only if you are playing games or use the GPS a lot, the battery life will of course go down.

The JiaYu G5S supports a wide range of GSM and WCDMA frequencies including 850/900/1800/1900MHz for GSM and 800/850/900/1900/2000MHz for WCDMA, but doesn’t have support for LTE networks. Reception quality is good, even though the phone is mostly made from stainless steel. During the test we had a 3G signal for about 60% of the time and GSM was pretty much always present with at least two bars in the signal indicator.

Other supported network technologies are Bluetooth 4.0, Wi-Fi b/g/n and GPS. In our tests Bluetooth works at a distance of around 8 meters, a bit limited compared to other phones but still enough of using a BT headset with the phone in your pocket. Wi-Fi is working quite well, but here the signal strength is also not as good as with some other phones. You might have issues getting a stable connection within your backyard for example.

GPS is the really issue here, and the JiaYu G5S like many other Mediatek phones has a terrible connection with satellites. Even using the most popular GPS hacks the GPS continued to be poor, at one point taking more than an hour searching before we finally gave up.

JiaYu unfortunately has not given the octacore JiaYu G5S Google’s latest Android 4.4 KitKat, but instead is using Android 4.2.2 JellyBean. The system is mostly stock, yet has got some UI changes and looks like a mix of MIUI and stock Android. JiaYu have resisted the urge to load the phone with junk, and also we were not able to find any viruses or trojans on the phone.

There are some bugs though, which are worth mentioning. First is the missing control for the CPU’s power saving mode, while this improves battery life it does cause the frame rate to drop. Another bug is, that if you reset the phone to factory settings, you will be left without any pre-installed keyboard. Now this is easy to fix, but still pretty annoying.

Something that might be interesting for some as well: Rooting the JiaYu G5S does not seem to be quite easy. We tried it with Framaroot, vRoot and other popular tools – all of which failed.

With the persistent power saving mode of the MT6592 processor due to the JiaYu G5S ROM, benchmarks are lower than on phones with similar hardware. Below are some screenshots of popular benchmark tools for you to have a look at.

But what does that mean for real life performance? Well, you might not notice any difference as long as you are not playing any games. The UI is surprisingly smooth and all in all appears to work better than some other MT6592 phones. It seems JiaYu’s developers have put together a well optimised ROM. Thanks to the 2GB of RAM, multi tasking isn’t something to worry about and even browsing large websites in multiple tabs does not create any noticeable slow down.

Gaming does show some notable performance trade-offs. Real Racing 3, Asphalt 8 and Dead Trigger 2 on the phone are all playable, but all definitely have a lower frame rate than we have come to expect. A third-party ROM with might solve this, but for now it is something buyers will have to live with.

The octacore JiaYu G5S with its stainless steel body is definitely a beauty. The 4.5-inch screen offers great viewing, keeps the size down to an easy to handle form and helps with the battery life. For $240 (international price) you will be hard pushed to find a phone with similar quality display and rear camera in fact. The G5S is far from perfect though, the non functioning GPS is a major let down and the bugs found in the OS are irritating. Your decision to buy the octacore JiaYu G5S will rest on if you need GPS, and if you can live with the stock ROM, or at least until an alternative is released.

If you take the GPS out of the equation then the JiaYu G5S is a competitive phone, with some wonderful features and easily the best build quality in its class.

Thanks to TradingShenzhen.net for sending the JiaYu G5S over to us for review.