Xiaomi’s first tablet, and the worlds first Nvidia Tegra K1 tablet, has already sold out in China and benchmarks from the device are being published.

The Xiaomi Mipad, for those of you unfamiliar with the device, is a 7.9-inch Android tablet which runs Xiaomi’s own MIUI custom OS based on Android 4.4 Kitkat. The MiPad has a retina display, 2GB RAM, and a powerful Nvidia Tegra K1 processor.

Chinese owners have already started to posted their Antutu benchmarks and it’s of no surprise that they are way up there. As the screenshot shows, the Mipad scored 39.798 in Antutu! That’s more than the Galaxy Note 3! 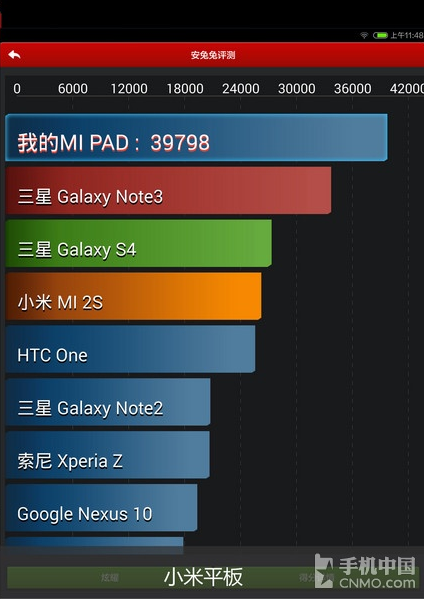 Of course a benchmark doesn’t paint a full picture, but at lease we know the Xiaomi MiPad is a powerful Android tablet. The problem now is how do fans of this product get their hands on the Xiaomi MiPad? The device is only offiically available in China and has already sold 50,000 units in just a few minutes! How do you plan to get the MiPad?

We hope to receive a review unit soon so keep posted.