As we type Nubia are in the process of launching three new smartphones. The Nubia Z7 , Z7 Mini and Nubia Z7 Max, here are the details so far.

Nubia’s new phones, the Z7 Mini and Z7 Max have been designed to replace the ageing (but still rather good) Z5 line-up. Like the Z5’s, Nubia have produced a large and small device to cater for customers needs, however both phones are larger than the devices they replace. 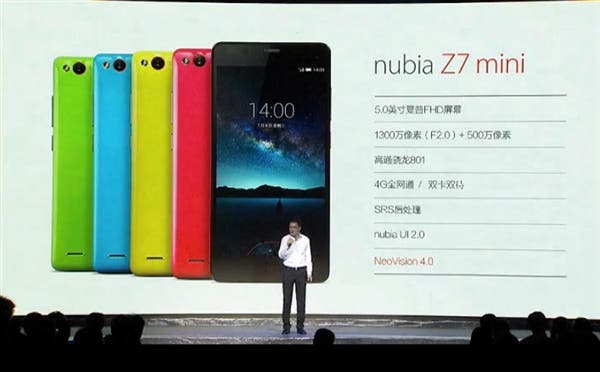 The Z7 Mini is a 5-inch 1920 x 1080 phone with Snapdragon 801 processor, LTE, 5 mega-pixel front camera, and 13 mega-pixel F2.0 aperture rear camera. The small, but powerful phone will come in a wide range of bright colours including green, blue, yellow and red and ships with the latest version of Nubia’s custom Anroid ROM.

Taking over from the Nubia Z5 is the Z7 Max. Max might conjure up ideas of a huge phablet, but in the case of the Nubia Z7 Max we are talking about just a 5.5-inch display. The panel is a FHD unit, we get the same camera set up as the Nubia Z7 Mini, LTE and another Snapdragon 801 chipset.

The flagship though is the Nubia Z7 which has a Snapdragon 801, 3GB RAM, 32GB internal memory and even dual SIM Support for 4G LTE and 3G networks! The Z7 has a 5.5-inch panel like the Max but with a higher 2K 2560 x 1440 resolution display. Camera specs are similar again with the front being a 5 mega-pixel shooter and rear a 13 mega-pixel F2.0 with OIS.

We are waiting for the launch to end so that we can post pricing and release details.

Previous Faceboook option off for one day!: Win A OnePlus One!

Next Xiaomi Mi3 to go on pre-order in India July 15th at an incredible price of 15,000 INR