While the headline might not sound like rocket science to you, I’m sure there are folks who would be more than happy to get two days of smartphone usage out of a single trip to the wall socket.

When I received the OnePlus One, I was worried about the battery life on the phone, since it had a massive 5.5-inch screen. Having used the Find 5 for quite some months, I would’ve been happy to get a single day’s usage out of the phone; fortunately the OnePlus One battery does better. Despite that, I had to plug the phone to charge every night for there wasn’t enough juice to take me through the next day at college (and I can’t afford to have it die whilst).

Just to put things into perspective, here’s the apps/features that I use: WhatsApp, calls (~20-30min/day), Chrome, WeChat, feedly, 2x Gmail accounts, Quora, Facebook (and Messenger), and a few shopping apps besides the usual Google services.

On an typical working day, there’s about 4 hours of screen on time that I consume. While leaving WiFi on at home (while the phone isn’t in use) doesn’t consume a lot of battery, leaving data on certainly does, which is something I noticed right on day one. So from 8 hours of screen on (in 25-28hrs of use), the phone went to about 5 hours of screen on (which I think is a good metric to estimate battery life), when data was on.

I’ve been using Android phones for a while now, and have learnt a few tricks which I decided to implement, in a bid to extend battery life. Hence, I installed Greenify and Tasker, two of the most useful apps you’ll ever find, in my opinion. But as many of you might know, Greenify requires root to work at full potential; the phone was then rooted (click here if you want to know how). 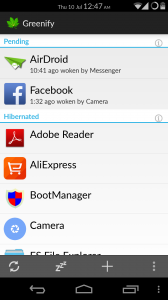 What Greenify does is pretty straighforward; the app puts user-selected apps into ‘hibernation’ so they don’t consume battery in the background. Another useful tool is the ‘cut wake path’ feature, which allows you to ‘cut’ the path through which the app re-launches itself in the memory (some of these ‘paths’ can be ridiculous). Lastly, also enabled auto-hibernation (self-explanatory).

Now, Tasker. In all honesty, Tasker is the MOST powerful Android app I’ve ever come across. The app is a programming language in itself; it’ll take you as far as your imagination. 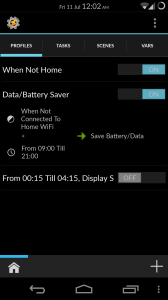 So I created this simple Tasker profile which helps save data as well as battery when the phone is not in active use. The profile basically turns on data for a specified amount of time and then turns it back off, and this keeps repeating in pre-defined intervals during the time the phone isn’t in active use. If the screen is on, the system again checks in another 15 minutes. It is a bit complicated, read what follows to understand better. Also, I don’t need to be connected while I’m asleep; so there’s no data/WiFi during the night (you can define what is night for you).

Triggers that activate the profile

If these two conditions are met simultaneously, the profile is active. Here’s what follows:

What happens when the profile is active

After quite some modifications to the profile, I think I’ve reached an optimal point. The phone now goes on for two days without a charge in between, which is something we all can do without, but love at the same time.

Some battery stats while the above profile was used in conjunction with Greenify:

After almost a day of use, the phone clearly has enough juice to take me through one more

There are other profiles I’ve done, so let us know if you’re interested and we’ll post more of this! Also, be sure to let us know how you use Tasker with your phone if you already do.