It was no shock when Xiaomi unveiled their first Android tablet. What was a surprise was the hardware and price, but is this iPad mini like Android device really a tablet we can all live happily with? Find out in our full Xiaomi Mi Pad review.

Having followed the Xiaomi Mi Pad rumours and leaks since October of last year, I was A) Getting a little fed up of the wait, and B) Throughly beginning to believe that Xiaomi might be launching the world’s best Android tablet! Actually, scratch that, the best tablet full stop!

After having owned 2 for the past few weeks I’m convoked that it is one of the best Android tablets you can buy at any price, but there are certain missing features and design features that if added/changed, could make this great tablet truly awesome.

Tablets, by their very nature, can only really be oblong and … well … tablet shape. So when taking the Mi Pad and placing it next to any other 7.9-inch tablet there is very little difference in design or style. In fact if you have an iPad mini to hand-pick it up and imagine it was slightly thicker, heavy and that your pocket was way more full of money, and you’ll have an idea of what the Mi Pad is like. 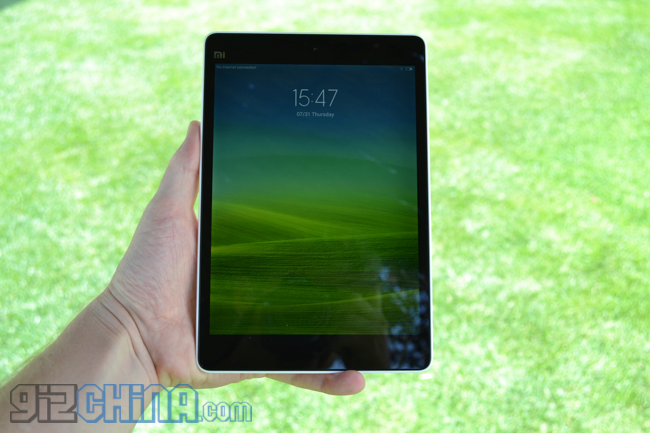 In fact after first being surprised by the extremely glossy rear of the tablet, the size, thickness and weight are generally the next items which most people comment on. The weight is especially something that concerns many, it isn’t exactly heavy, but compared to other tablets it has got a lot more heft to it. 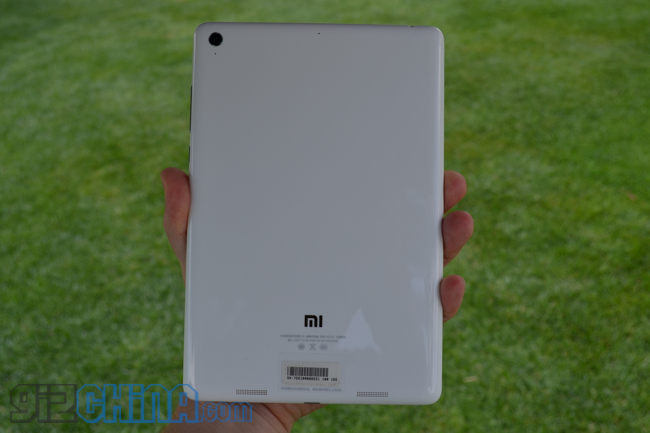 As mentioned above the rear of the Mi Pad is very glossy. The sheen across the white panel on our model offers no inherit grip what so ever, so ensure you keep a good grip of it and don’t leave it resting anywhere that isn’t completey flat or your new MIUI tablet could be heading for a trip to the repair shop! 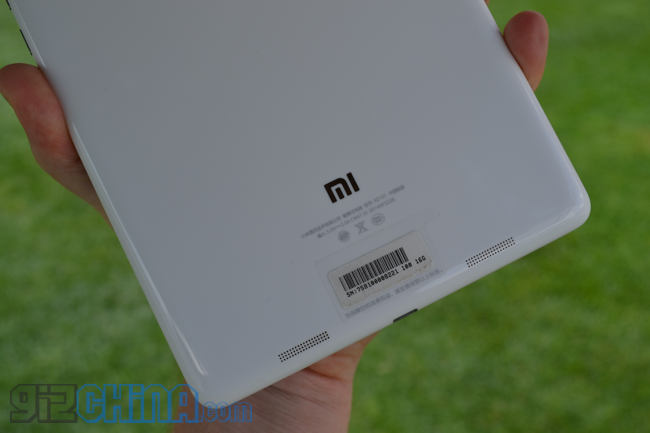 That glossy rear panel is where the now famous Mi logo is found towards the bottom, beneath which live two very impressive speakers, and the 8 mega-pixel F2.0 rear camera is situated at the top left hand corner.

The sides have physical controls for the power and volume, there is a 3.5mm head phone pack at the top, micro USB in the bottom and small tray on the left side. Now don’t get excited and think the tray is for a SIM card so you can get LTE or even 3G data on the tablet, as this is just where the SD card (up to 128GB) can be added. 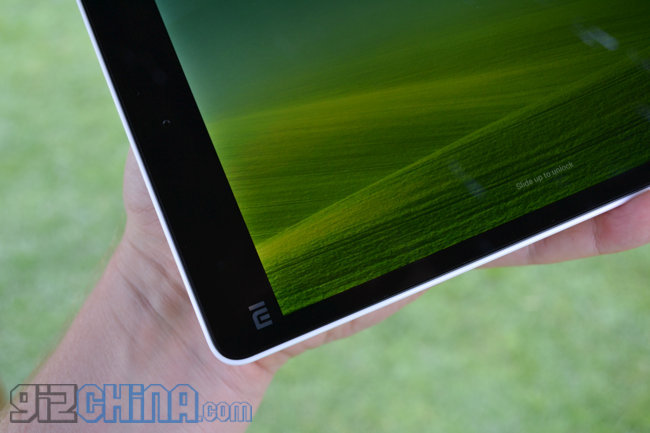 All of your viewing and most of your interaction with the Mi Pad will be handled by the 7.9-inch Retina display, while other navigation handled by the capacative buttons along the bottom of the screen.

That’s it for the design. It isn’t original by any stretch of the imagination, but it is a nice simple design that gets the job done. If only it were lighter and thinner then the feel of the Mi Pad would be better, but we can look forward to that for the 2nd generation perhaps.

I’ve already touched on a few of the features, but here I will go over everything we know of Xiaomi tablet.

Starting with the stand-out features we have that 7.9-inch IPS display which a resolution of 2048 x 1536 and offers a pixel density of 326ppi. Pushing those pixels around is the job of a Nvidia Tegra K1 quad-core processor running at 2.2Ghz and 2GB RAM.

The version of the Mi Pad we have on review is the 16GB version, there is also a 64GB model, but both tablets have space for up to 128GB SD cards. Cameras are an 8 mega-pixel rear with auto-focus and F2.0 aperture, while the front is a 5 mega-pixel camera with f2.0 aperture. Neither camera has an LED flash but that’s fine as smartphones do most of our snapping these days.

As you can see missing from the list are 3G, 4G LTE and GPS. A shame, but we suppose something had to go to keep the price down to just 1499 Yuan.

I’m not as hard on my tablets as I am on my phones, but for this review I did play GTA on the Mi Pad along with Asphalt and a few other racing games. The Nvidia Tegra K1 and Kepler GPU don’t even seem to notice, with even the most graphically intensive jobs handled with ease.

Benchmarks are impressive! As you will see the number that the Mi Pad is recording are pretty darn high! Higher than most devices out there today. In the real world this means the Mi Pad is fast, very fast. In the Benchmarks world, it means you will be able to brag for months to come. 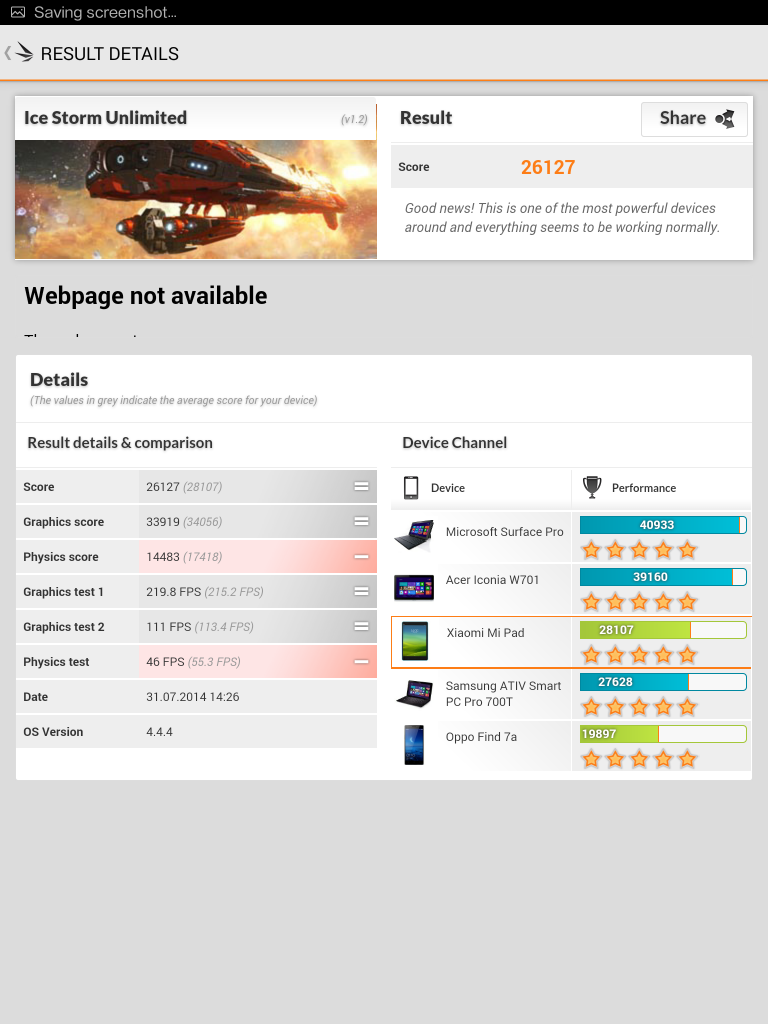 For 3DMark I simply didn’t test the MiPad in Ice Storm or Ice Storm Extreme, as the tablet is just too powerful. As for Ice Storm Unlimited the Mi Pad managed a score of 28,107. Which has it ranking above the Oppo Find 7a, OnePlus One and other top of the range smartphones.

Antutu X gives a result of 51,382 points! Amazing result that beats even the recent score we managed with the Vivo Xshot!

Basically you are going to have a really difficult time slowing the Mi Pad down.

All Xiaomi phones run MIUI, and the Mi Pad does too. In fact it runs the latest version of MIUI V5 based on Android 4.4.2 Kitkat. If you are use to using MIUI on your Xiaomi phone you are going to feel at home on the Mi Pad, well except for a few things. 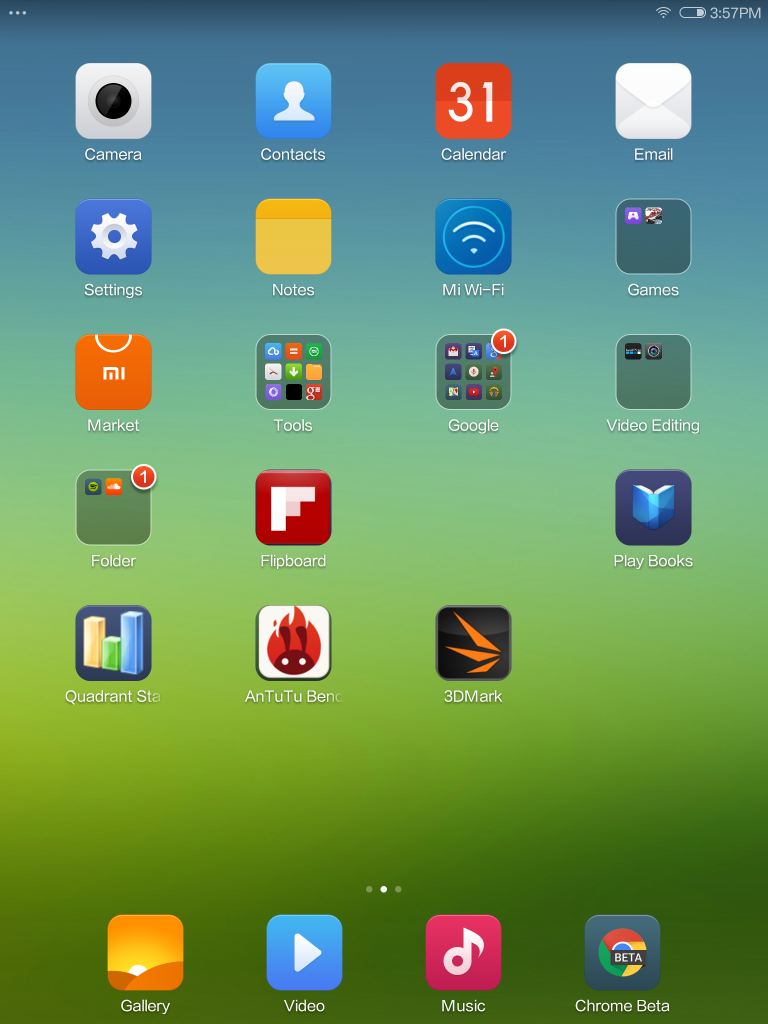 Firstly there are no widgets available in MIUI for the Mi Pad. Quite annoying for me as I like to have my Google Now cards showing with weather and quick access to Google Search. You can however set up the buttons to activate Google Now with a long press, but if you this is where you might run in to another issue.

The two MiPad which we received came from different resellers but they had installed Google Play store in the same way. I’m not sure how they had installed Google but whatever they had done causes the system settings, especially the ‘buttons’ settings to crash. The remedy is simple, either ask the reseller not to install Google Play for your and do it yourself, or install a fresh MIUI ROM on the tablet and start again. Either option is simple and easy for anyone to try, and we have even written up guides how to install Google Play on the Mi Pad here.

How to install Google Play on the Xiaomi Mi Pad

The rest of the MIUI system is like a basic version of MIUI on your phone. The camera app doesn’t have many settings of features. In fact the whole ROM lacks anything worth pointing out. It’s simple and easy to use, but it is also a little lacking.

Fortunately MIUI is ready to be updated to MIUI V6 on 16th August. Hopefully we will see a new feature packed ROM available for the Mi Pad then.

The battery in the Mi Pad is a none removable 6700mAh unit that generally give good performance. However, between the two Mi Pad tablets we have on test, one certainly does better than the other.

One Mi Pad has been used daily as a Ebook and web browser and is left on stand by for around 2 weeks and only now needs to be charged. The other Mi Pad seems to be drained in only a matter of days. If the issue continues I will have to said it back for replacement.

Our ‘good’ Mi Pad though generally has great battery life, and depending on how you use it will only need charging every few days to every few weeks. According to some reviewers the Mi Pad can sit on standby for 50 days, can handle 11 hours of continuous video, 86 hours of music and around 5 hours of intense gaming, and we can agree with those remarks having managed similar results.

A tablet, no matter how good it’s camera may be, is never going to be your primary photography tool. The Mi Pad is no different. The size and weight just don’t make it practical to be using it as a main camera, but as a back up it is great!

The front camera is especially good for video calls and can take some nice selfies that would rival a phone. 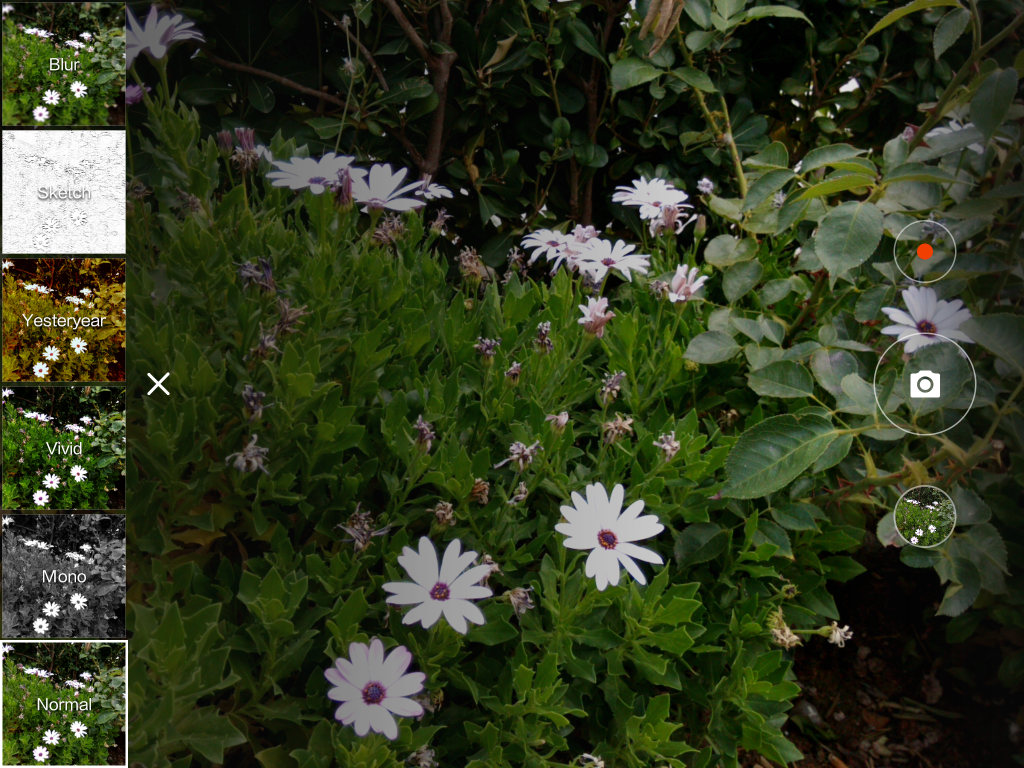 The rear 8 mega-pixel camera is good and can hold it’s own against low/midrange Android phones. It’s also good for taking photos to produce time-lapse videos, or using animation apps which my kids love. Below are some sample photos taken with the Mi Pad.

WIFI and Bluetooth are the only methods of connecting your Mi Pad to anything (well USB too) and those all work as you would expect. Browsing over WIFI is fast and the signal strength is very good (we are also using a Xioami Router).

We hope a second generation Mi Pad will receive LTE and a GPS, then we would probably use the tablet more often while out and about and also while traveling.

As it is though the Mi Pad is still a solid proposition and if you are in the market for a WIFI only tablet you would be mad not to at least strongly consider one!

Thanks to HonorBuy.com for supplying us with one of our Xiaomi MiPad review units.

Previous Xiaomi is charged with altering sales figures in Taiwan