When it comes to Chinese technology, there is a lot more to discover than just Android devices. This is why we want to move “off topic” this time and talk about a Chinese flashlight! To be more exact, it is a flashlight manufactured by UltraFire. This company is a very popular Chinese brand, especially known for its rechargeable lithium batteries, and now durable torches.

We’ve put the UltraFire Cree XML T6 waterproof flashlight through rigorous testing for the past few days and want to tell you more about it in this review full review.

The UltraFire Cree XML T6 is built around a machined metal alloy body with waterproof seals, making it ideal for all sorts of outdoor activities. As the model number suggests, the flashlight comes with a Cree XML T6 LED, Cree are regarded as one of the best LED makers in the market, so the Ultrafire promises very good performance. The flashlight features a swivel head, that allows you to focus the light beam and it is advertised to be as bright as 2,000 lumen. There are 5 different modes: High, middle, low, stroboscopic and SOS, and you will need two 18650 lithium batteries to get the light glaring.

For your information we bought our hardware at the following online stores: 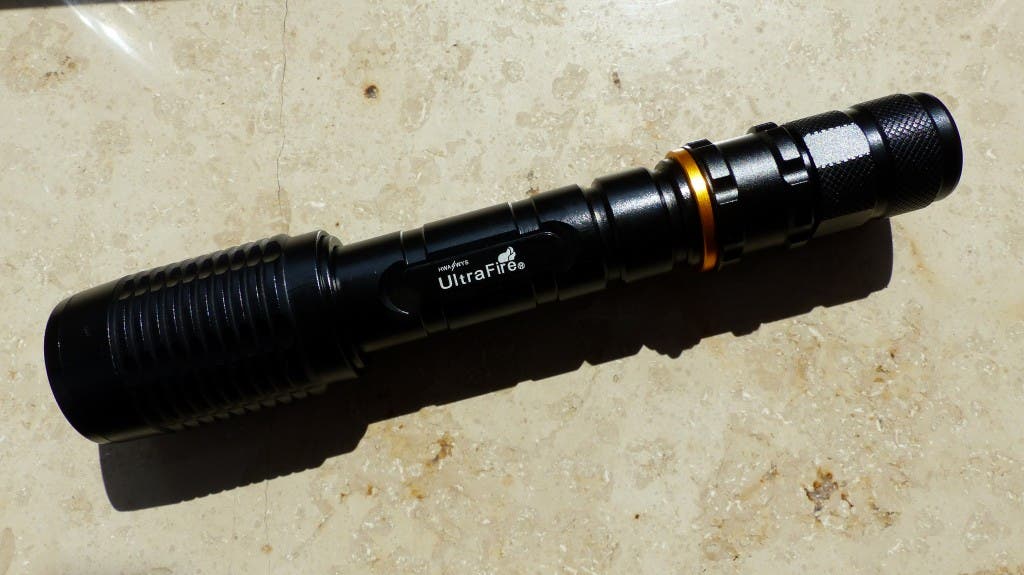 I ordered the UltraFire Cree XML T6 flashlight from Aliexpress and it was delivered to me by Singapore Airmail,wrapped in just in bubble wrap. There was no packaging or user a manual. That it managed to make the trip to me without damage shows that it is a robust unit.

First impression were rather good. The flashlight is made of a machined alloy, which knurled areas for grip. The metal body means that it is quite heavy at 272g, but also that it is tough and that heat can be quickly dispersed. The only part that isn’t metal is the button for turning it on and setting the modes and obviously the lens. 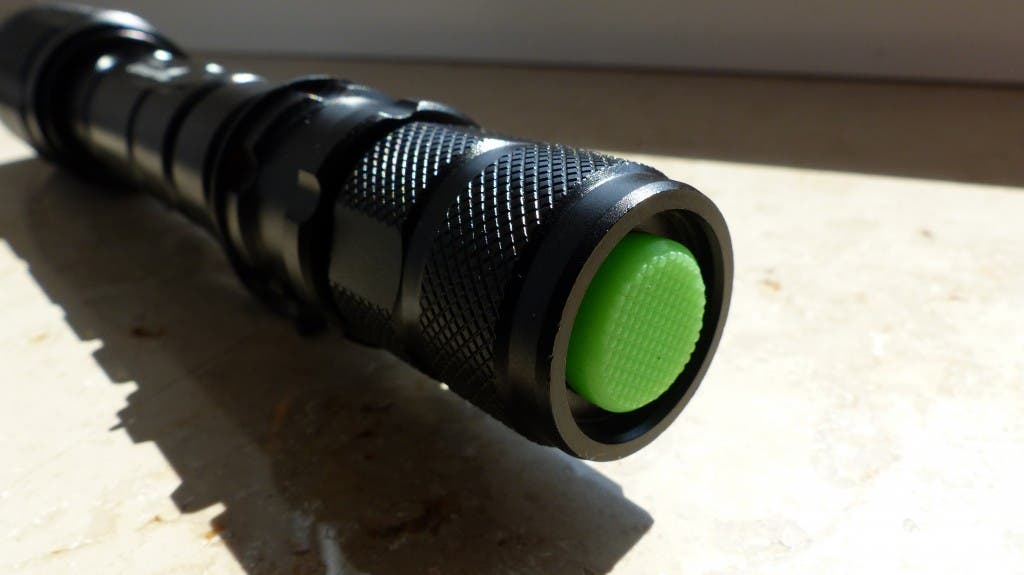 The overall design does look rather cool and stylish. The top can be pulled up and down to focus the light beam. It also features a small built-in clip to attach it to your trousers or belt. 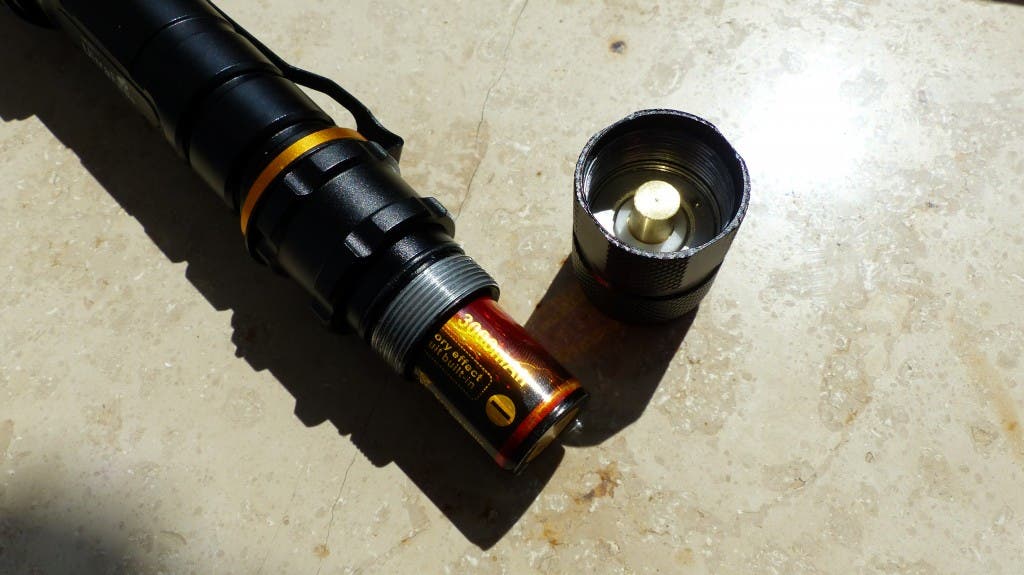 The part with the on / off switch can be screwed off, and has a single, simple O ring seal. This should keep water out in the rain or a short dip in a stream, but it won’t be enough for prolonged use under water. With the cap off, you can look inside the flashlight where the batteries can be placed.

Obviously I wanted to see if the flashlight actually had 2,000 lumen on tap so did the first tests in daylight. It was quickly apparent that the output is closer to 400-500 lumens, as it wasn’t nearly as bright as an 800 Lumen LG we had to compare it to. Still, this is not bad at all, and as soon as we headed outside with the flashlight at night, I felt that the power offered was more than enough. High power mode is the way to go! The beam can easily light up an object around 500m away from you. If you focus the beam, with the adjustable head, it can even reach up to 1km – just as advertised. So yes, this flashlight is bright and very usable. We have prepared some demo pictures for you below.

Having just a single button to control the mode means that you have to do a lot of clicking to get the mode you want. Click it on for mode one, then off and on again for mode two and so on. It’s a fiddly way to do things but it also keeps moving parts and openings to a minimum.

As batteries do not come with the flashlight, battery life will always depend on the cells you put inside. We tested the UltraFire with two protected TrustFire 3,000mAh li-ion cells. These are Chinese cells featuring a real capacity of around 2,600mAh. They very cheap at only 10 bucks for two of them. Please note that it is important to get protected cells, as they tend to become quite dangerous when you over or under charge them. We recommend that you  never go below a voltage of 3.3V for maximum battery longevity. Also get a proper charger. You don’t want to see a 18650 exploding in your house or even worse, your hand! 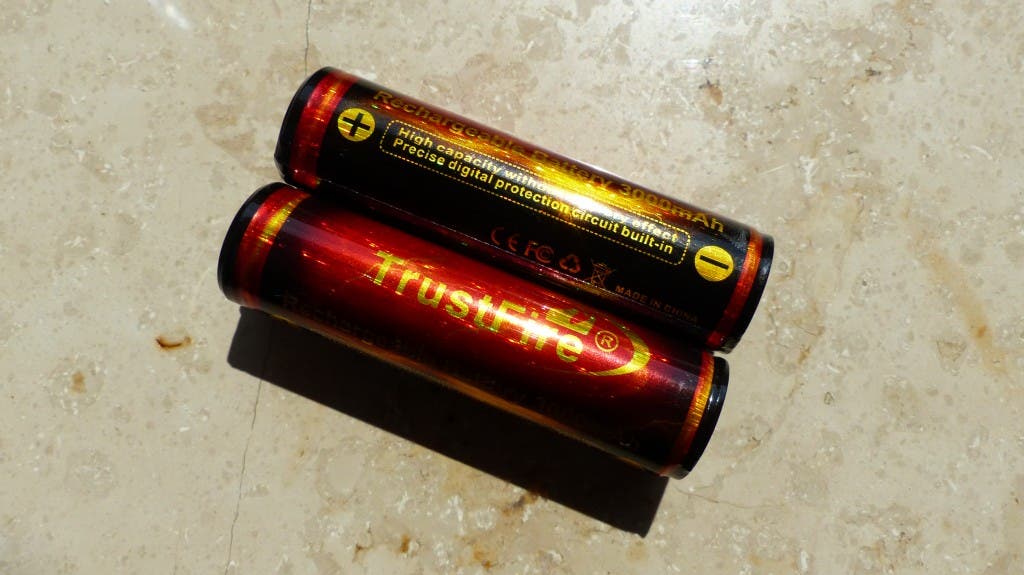 During our battery benchmark tests, we got the following run times with this flashlight until the above mentioned voltage has been reached: 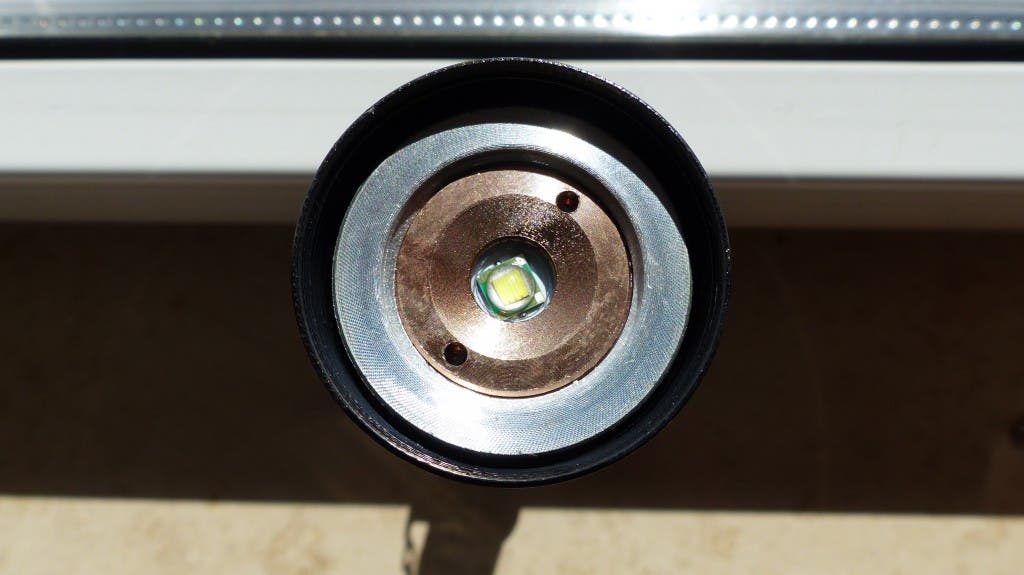 As usual, Chinese resellers have either been fed the wrong information or are feeding us the wrong specs. The UltraFire Cree XML T6 flashlight does not have 2,000 lumen, it is around a 1/4 of that power. Still it is a very bright tool that can throw a beam around 1km away! Not bad for something that costs $16. Just keep in mind that you will need at least $35 in additional investments for a proper 18650 charger and 18650 cells in case you do not have all of this already.

For the money the build quality and power output is amazing! What’s great is that a single lens swap can change the throw of the beam and better batteries will increase life and still the UltraFire Cree XML T6 will cost less than a similar big brand flashlight! Overall a great product for a good price!