We take a look at three of the latest, most up to date ROMS from Chinese smartphone companies Flyme 4.0 from Meizu, MIUI V6 from Xiaomi and IUNI OS from IUNI.

There was a time in the dark ages of Chinese smartphones where the ROM would be the major problem. Poor design, lack of updates and bugs used to cause havoc on hardware that was capable of a lot more. Those days are over now though and most Chinese smartphone makers are producing amazing ROMS that offer everything you could need including frequent updates.

In this article we take a look at three ROMS, 2 of which are recently updated and will be released soon and the third which will soon be released with English language options.

Flyme is the custom ROM from phone maker Meizu that is now in to it’s 4th iteration. Meizu announced Flyme 4.0 at the Meizu MX4 launch last week and confirmed that the new ROM would be released for the MX4, MX3 and even the MX2 smartphones which should be great news to owners of the older devices. Flyme 4.0 is based on Android 4.4.2 in our sample phone. 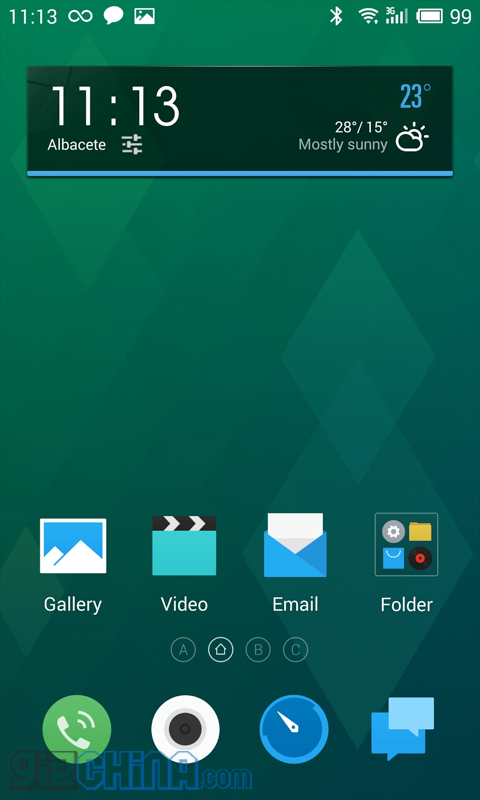 On the surface the look of Flyme 4.0 has changed very little to Flyme 3.0, but looking under the hood we find some great new features.

The look of Flyme 4.0 is of the en vogue ‘flat’ look, which was actually first introduced with Flyme 3.0 (yes, before Apple launched iOS7). Now, all ROM makers are going for the simplified style.

Flyme 4.0 has a set of Flyme icons for hundreds of the most popular apps. Personally I’m not that keen on the Flyme icons as they appear to large, but Meizu had thought about that and switching from Flyme to standard icons is as simple as flicking a switch.

All your apps are arranged on the home screens of Flyme 4.0, there is no app draw, a common feature with all the ROMs here. To keep things tidy we have a dock for our most used 4 apps and other icons can be arranged in folders.

Flyme 4.0’s new notification area now extends the full length of the screen with a transparent background. Quick settings are also available here and can be customised and arranged to suit your needs.

Head in to the main settings of Flyme and things haven’t changed all that much from Flyme 3.0. There are some new colours and the switch icons are the same, but the rest of the UI remains unchanged.

From the settings we can switch between English, Chinese, German, Spanish, French, Italian, Portuguese and Russian. Flyme developers have also added some gesture options on the lock screen which they call “smart wake” in the settings. The options include double tap to wake, slide up to unlock, slide left to enter the camera and swipe right to open an app of your choice.

Some apps in Flyme 4.0 have been given an refresh with a simple new look and brighter colours, while the camera app has been completely reworked to offer new features and all new UI.

Swiping from left to right on the screen in the camera app switches the camera option and there are plenty to choose from including auto, manual, face beauty, panorama, refocus, night, bar code, slow-motion, macro. Switching from one option to the other brings up a bunch of unique setting options for you to tweak and play about with.

Multitasking on Flyme is handled by a draw which can be opened by swiping up from the bottom of the display. Apps can be either locked individually or all at once, and you can easily lock apps so they continue to run in the back ground. Oddly Flyme 3.0 also had an area to adjust the brightness in the multitasking bar, which is now no longer available.

Flyme 4.0 for the Chinese market also has a great looking weather app with animated weather, and a built-in SIRI like voice assistant. For the English ROM these features have been removed, but we hope they will be added in the final build.

Currently Flyme 4.0 is only available for the MX4 but will be released on other models. Flyme 3.0 can be downloaded on the Samsung S4 and Nexus devices in the future.

MIUI V6 was announced during the Xiaomi Mi4 launch, however the ROM isn’t officially available yet and is still only for developers and is a little laggy at times. The official release will be in October sometime and will be based on Android 4.4.4. MIUI V6 will be released for all Xiaomi devices over the coming months but only the newer phones will have a Kitkat based rom, the Xiaomi Mi2 for example will have MIUI V6 based on Android 4.1.

Visually MIUI V6 is much nicer, simpler and cleaner looking than MIUI V5 it replaces. It is still a ROM that is heavily influenced by iOS, perhaps even more so than before, and overall little has changed in terms of function between the older and newer OS.

The icons in MIUI V6 are very simple and bright, I really do like the look of them, the whole UI looks playful and fun, and if that isn’t for you then anyone of the MIUI based themes can easily be added to suit your style. 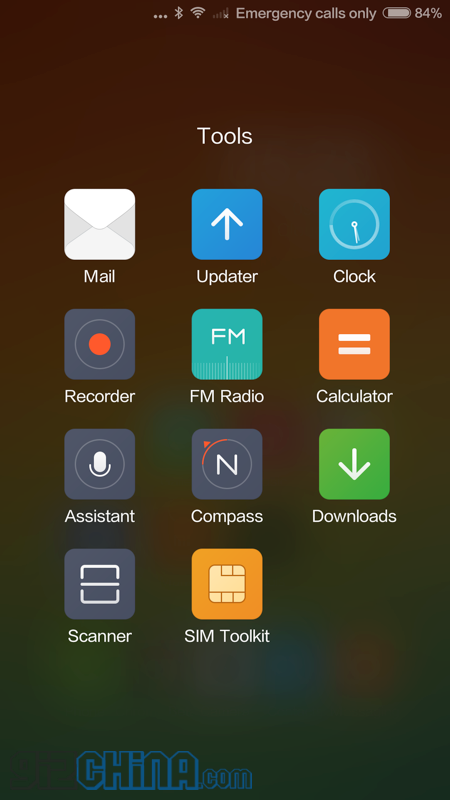 Like Flyme there is no app draw, and you can arrange your apps in folders depending on your usage. The dock in MIUI can hold 5 icons making which I prefer as I can set my most used app in the center.

The notification area has a transparent background to it, and this time swiping to the right will bring up customisable quick settings, brightness control and music controls.

MIUI V6, like V5, allows you to set the buttons of your phone up for different features. In my case a quick tap of the left menu button brings up the multi-tasking window where I can clear or lock apps. 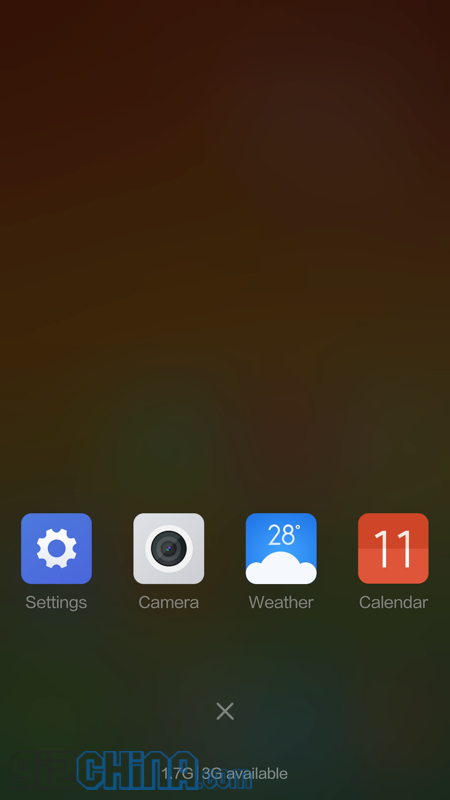 Holding down the home button can be set up to use Google Now voice search, there is also Xiaomi’s own voice assistant if you are able to speak Chinese. Also from the buttons settings there are also a limited number of lock screen gestures. There is no quick wake but you can choose to use the back button to activate the camera (by default you can swipe right on the lock screen to open the camera).

The settings UI has been made lighter and clearer. The white background and bright icons make all the settings more accessible and easier to find than before. Even a season MIUI V5 user will easily find there way around. From the settings we can also switch language buy officially MIUI only supports English and Chinese. A similar UI can be found in the build in Games store app, and the calendar app gets a nice new look also.

Speaking of system apps, the MIUI weather app with it’s all new look now natively supports cities outside of China, great news as this is by far one of the best weather apps available (in my opinion).

The camera app has been redesigned too, and looks alarmingly close to the camera app in iOS7. As with Flyme you can swipe from let to right but this time you only get access to filter and a general settings window.

MIUI V6 is a very nice and bright OS, but some users are going to be put off by it’s similarities with IOS. The ROM itself is very functional with great features, and although there are only officially 2 languages, the MIUI community are quick to release alternate language versions.

As mentioned above MIUI V6 is currently for developers only, but as MIUI V5 is already available on hundreds of phones from many different manufacturers we expect the same to happen here too.

IUNI OS is the youngest of the ROMS and takes a totally different approach to things when compared to MIUI and Flyme. Rather than adding as many features as possible to the ROM, IUNI have decided to make IUNI OS bloat free and lightweight. This means that features and functions are down to a minimum, but what the OS has got performs extremely well. The simple UI and ROM has also allowed IUNI OS to be quickly and officially ported to 11 Chinese smartphones to date including all versions of the Xiaomi Mi3, Oppo Find 7a, OnePlus One and more.

For less tech savvy users the IUNI OS is a breath of fresh air, the limited features mean less flicking through options, and simply getting on and enjoying the phone. It also means we can expect plenty of new features to be added to the OS as development goes by.

Again we are looking at a flat UI, with colour choices sitting between the muted look of Flyme and the bright icons of MIUI. There is no app draw and only 4 icons can be placed in the dock, and apps can be sorted in to folders.

From the home screen swiping down from anywhere on the screen brings up a black transparent notification area, while swiping up from the bottom of the screen bring up quick settings, brightness control and the task manager. 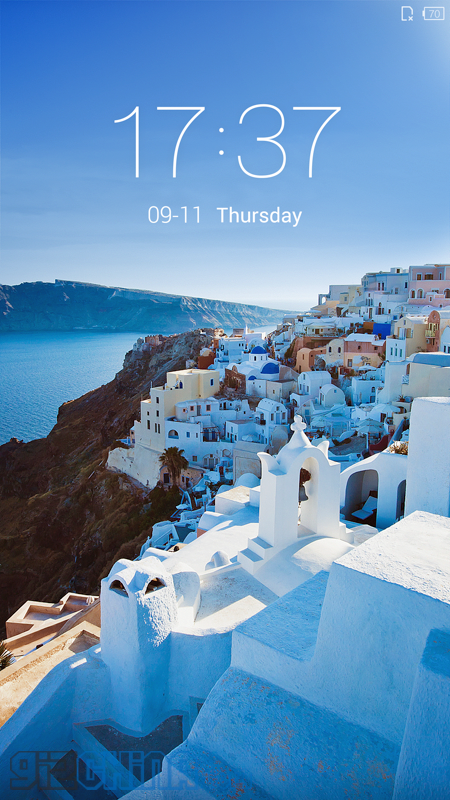 As IUNI have kept things simple they have been able to polish things and give some nice little touches which both Flyme and MIUI don’t have. Animations in IUNI OS are smooth and classy looking giving a unique feel to the ROM. The animated clock icon is a really nice touch as is the randomly changing lock screen image.

There are no smart wake options in IUNI OS for now, but you can wake the screen up with the power button as usual and swipe to the right to quickly access the camera. Speaking of which the camera app is the most simple to use of all the ROMs, with only options for sound, HDR, night mode, panorama and record. As far as I can tell you cannot even choose the image size or even the resolution of the video.

IUNI OS is a very nice ROM which will appeal to phone users who just want everything to work without fuss. For the more advanced Android user though the lack of features and settings could be a little frustrating.

So 3 different ROMs from 3 different phone makers. Which ROM do you fancy trying? What features are missing? And what other Chinese phone ROMS are worth a write-up? Let us know in the comments below.

Next Qualcomm outs Snapdragon 210, an LTE-on-budget-SoC to counter the MT6290