SK-Phone? Yep, we are not familiar with them either, but they will be difficult to forget after launching the SK-Phone X4 with 3GB RAM and LTE.

We have seen phones with LTE and 3GB RAM before, but never running on a Mediatek platform and never at a sub $200 retail price! Before you get too carried away I’ll have to inform you that the $188 price tag is for the Chinese mainland and we can expect a higher price of nearer $280 from resellers, but still that’s an amazing price for a lot phone! SK-Phone, not related to Korea’s SK Telecom, claim to be the first.

According to Chinese media, SK-Phone are actually selling the SK-Phone X4 at a loss, and we can believe it, as long as the reported hardware is accurate. Along with the much rarer Mediatek MT6592T processor (the 2.0Ghz octacore chip), the phone boasts 3GB RAM, 5.5-inch 1080 FHD display, 3300mAh battery, 16 mega pixel main camera and 8 mega-pixel front.

According to the current specs, only TD-LTE versions of the phone are available, but this is common practice in China and we can expected an FDD model launch in the coming months. 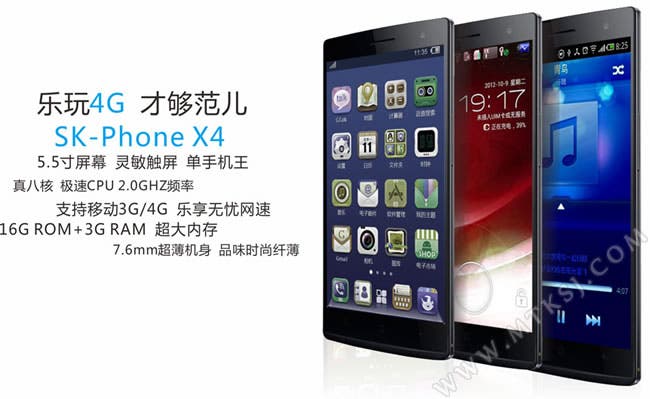 As for the design, it looks like SK-Phone have taken a few design notes from the OnePlus, Oppo team when producing the phone, that comes in a choice of either black or white. Overall a very smart phone and a sign of what is to come for 2015!