The KingSing S2 is looking more and more impressive as we learn more about it. We list some of the most interesting features of this LG G3 wannabe below.

The KingSing S2 is a near identical look-a-like of the popular LG G3. In fact if it wasn’t for the smaller 5-inch display and KingSing logos then it would be hard to tell the two phones from each other!

Thankfully the most interesting feature of this phone aren’t that it simply looks like the more expensive Korean device, and KingSing have actually put some thought in to their flagship phone to make it an attractive buy in its own right.

With a 5-inch display and super narrow 1.6mm bezels the KingSing S2 is just as comfy in the palm of your hand as a standard 4.5-inch or 4.7-inch phone from just a few years ago. But to make it even more suitable to one handed operation the S2 also features rear mounted volume controls and power button.

If you like to get out and be active then the S2 will attract you too. The phone features a built-in heart rate monitor located, again, on the rear of the phone. Simply place your finger or thumb over the sensor and the built-in software will give you accurate heart rate details.

Quick wake is a feature that many phone fans are asking phone and we are seeing manufacturer add the option to their own ROM’s. King Sing to have added quick wake gestures and options to the S2. Tap to wake has been added, as well as lock screen gesture controls which active apps.

Other smart features include air gesture, smart eye scrolling (the screen moves up as you eye reaches the end of a page), and other useful options such as flip to mute.

Specifications for the phone are mid-range, meaning pricing will be attractive while performance shouldn’t suffer too much. The processor is a quad-core MT6582 chip, there is 1GB RAM, a 5-inch HD 720p display and 8 mega-pixel main camera. The only feature which worries us is the 2000mAh battery, but with Android 4.4 Kitkat power management optimizations hopefully this won’t be much of a concern. 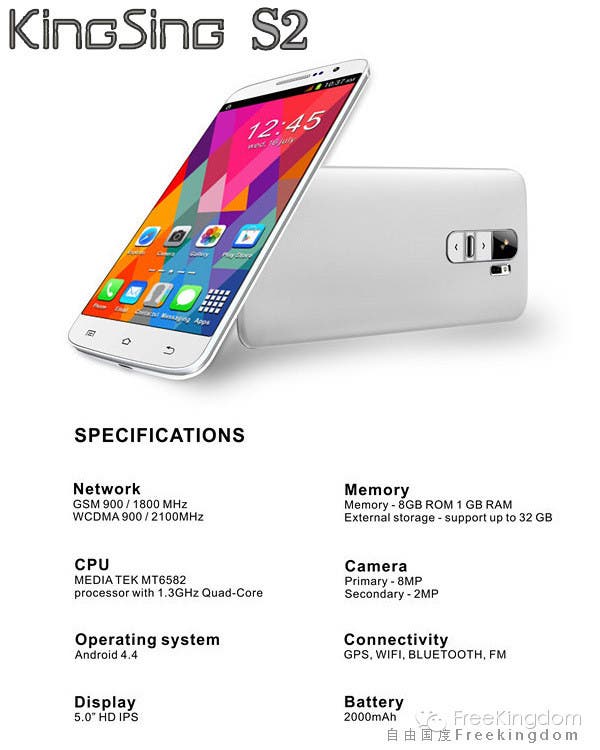 We are currently waiting for our KingSing S2 smartphone to arrive for hands on and review. More details of the phone can be found on the official Kingsing.hk website.